Looney Tunes Wiki
Register
Don't have an account?
Sign In
Advertisement
in: Cartoons directed by Chuck Jones, 1953, Shorts,
and 12 more

Don't Give Up the Sheep is a 1953 Looney Tunes short directed by Chuck Jones.

The title is a play on the expression "don't give up the ship."

Ralph Wolf is trying to steal the sheep which Sam Sheepdog is guarding.

Ralph's first plan is to trick Sam into going home early, by turning the time on the punch clock forward and setting the whistle off. Sam is initially tricked into thinking that the whistle indicated lunch time, followed by quitting time, and so he punches out and prepares to head home. However, he quickly notices the clock on a church steeple chiming nine o'clock and hurries back to see Ralph carrying a comically large pile of sheep. Sam Sheepdog suddenly appears behind a tree and breaks a tree branch over Ralph's head, driving Ralph into the ground.

Ralph's second attempt involves disguising himself as a bush. After stealing a sheep and starting to run away, he runs past Sam, who himself is disguised as a tree and starts to follow Ralph. Sam hits Ralph on the head with a branch, leaving Ralph very confused and with a large lump on his head. After attempting to run further, this occurs once more, and Ralph is left with two lumps on his head. Ralph then gives up and carries the sheep back to the field as Sam impatiently taps his foot, disguised as a tree root.

For Ralph's third attempt, he reads a book about Greek myths which explains that Pan would "lull shepherds to sleep with the music of his pipes and then steal the sheep." Disguising himself as Pan, Ralph attempts to lull Sam to sleep with a flute, but Sam merely punches Ralph in the face and Ralph stumbles away and continues to play his song, out of tune.

Ralph's fourth attempt involves tunneling under the field and pulling each sheep down through very small holes. This is mostly successful, until Ralph unwittingly pulls Sam underground and gets punched in the face. Ralph politely returns Sam and all the sheep, then refills his tunnel.

In Ralph's next attempt, he places an ACME product behind Sam, labelled "One Acme wild-cat - Handle with care". Ralph carefully opens the box with a rope from a distance behind another hill, but the wildcat simply runs in circles towards Ralph, maims him and scratches him and flees, leaving him dazed with part of his fur torn away.

Ralph's sixth attempt is to swing on a rope over the field and snatch a sheep. Unfortunately, he unwittingly snatches Sam out of the flock. After realizing this, he leaves Sam at the bottom of the rope and climbs to the branch that the rope is tied to and saws the end of the branch off. After seemingly sending Sam crashing to the ground, Sam appears on further down the branch and saws it off at that point, sending Ralph falling. After Ralph seemingly hits the ground, he appears at the start of the branch. This gag continues until Sam is on the end of a cliff and Ralph uses a pickaxe to detach the edge of the cliff and send Sam falling. The cartoon then disobeys gravity and leaves Sam's piece of earth floating in the air, as the rest of the cliff which Ralph is standing on falls down. Sam shrugs this off.

Ralph's next, seventh, and seemingly final attempt is to snatch a sheep which is drinking from edge of a lake. He uses a hollow rush to swim through the lake unnoticed. Sam notices the rush sticking out of the water and drops a stick of dynamite into it. Blasted by a small underwater explosion like "tsunami", Ralph surfaces and then sinks like a ship.

Finally, Sam walks toward the punch clock as his replacement Fred Sheepdog punches in and greets him "Hello Ralph." Sam hits him over the head with a plank, and the viewers see the replacement's rubber mask pop off from a head bump underneath, revealing him to be Ralph in disguise. As Sam begins spanking Ralph with the club, the real Fred Sheepdog shows up, punches in and says "Hello Ralph," and Sam responds "Hello Fred," and takes over for Sam, who leaves since it is the end of his shift, continuing to spank Ralph. 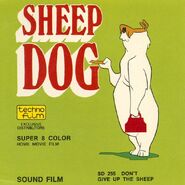 Every television airing of this short is normally aired left uncensored, but when it was originally broadcast on ABC's The Bugs Bunny Show in 1961, the following scenes were deleted:

When it was broadcast on The Bugs Bunny & Tweety Show years later, these scenes remained intact but the ending with Ralph Wolf in disguise as Fred, and Sam hitting him in the head with a thick stick, then clobbers Ralph in the backside with the stick when the real Fred appears and continues this action. was deleted.[1]