Donald Earl "Don" Messick (September 7, 1926 - October 24, 1997) was an American voice actor, best known for his voice work in various Hanna-Barbera shows such as Scooby-Doo in the popular TV series of the same name.

In 1996 while recording voices at the Hanna-Barbera studio, Messick suffered a stroke due to decades of smoking[1] and decided to retire from voice acting. He then had a retirement party at his favorite Chinese restaurant which was attended by his colleagues including Henry Corden, Jean Vander Pyl, Casey Kasem, Lucille Bliss, Gary Owens, June Foray, Howard Morris, Teresa Ganzel, Maurice LaMarche, Neil Ross, Gregg Berger, Walker Edmiston, Sharon Mack, Marvin Kaplan, Greg Burson, and others.[2] He suffered another stroke the following year and died. He was cremated and his ashes were scattered at sea.[3] Following Messick's death, the role of Scooby-Doo was passed on to Hadley Kay, Scott Innes, and eventually Frank Welker.

Don with the Hanna-Barbera characters that he voiced 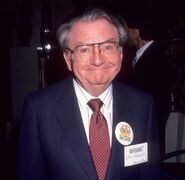 A tribute to Messick following his death. Drawn by Iwao Takamoto
Add a photo to this gallery

Retrieved from "https://looneytunes.fandom.com/wiki/Don_Messick?oldid=237906"
Community content is available under CC-BY-SA unless otherwise noted.