Daffy, introduced as a "Western-Type Hero" and Porky (billed as "Comedy Relief") ride along the desert until they come across a small town that's so full of violence, the population sign changes immediately when someone gets shot. Daffy notices that the last sheriff is shot, and the town needs a new sheriff. Looking through his various badges (which include "Chicken Inspector" and "Oh, you kid!"), Daffy picks out a sheriff badge and rides into town on his horse 'Tinfoil', with Porky following behind on his small mule.

In the town, Daffy is about to take a drink at the bar when Nasty Canasta walks in past his 'Wanted' poster (which states "$5,000,000 REWARD (DEAD)" and "RUSTLER, BANDIT, SQUARE DANCE CALLER"). Daffy tries to intimidate Canasta with his gun, but Canasta just bites off most of the gun and swallows it ("Hmm. Probably didn't have his iron today!"). Canasta then intimidates Daffy with a drink made of various poisons and toxic materials (so 'hot', when two ice cubes are put in, the ice cubes jump out, yelping). Canasta downs the drink with no side effects (other than his hat flipping), and when Daffy gets Porky to take the drink with seemingly no side-effects, Daffy downs his as well. A few seconds later, Daffy and Porky exhibit wild side effects, including:reciting nursery rhymes in Elmer Fudd-ese, turning green, and acting like they're both motorized. Eventually, Daffy challenges Canasta to a showdown in the street.

Daffy and Canasta start walking towards each other, the street deserted, when Porky winds up a small British soldier doll and lets it go towards Canasta. Canasta picks up the doll, chucking, until the doll points its gun at Canasta and fires, sending Canasta to the ground. The rest of the town rush over to Porky, while Daffy is still pacing his way to the middle of the street. Daffy finally notices the adoration given to Porky, and in vain tries to get their attention ("Gimme the cheers! Give me ... Give me one dozen roses."). Porky is now the town sheriff, and Daffy proclaims to the camera that he SAID he'd clean up this one-house town – except now he's the sanitation person. Porky remarks, "Lucky for him (Daffy) it IS a one-horse town." 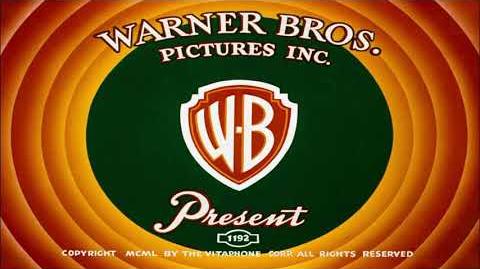 Drip along daffy
Add a photo to this gallery

Retrieved from "https://looneytunes.fandom.com/wiki/Drip-Along_Daffy?oldid=188025"
Community content is available under CC-BY-SA unless otherwise noted.