Daffy Duck is a musketeer in a medieval setting, who boldly acts out an action scene with a fencing foil. As he thrusts the foil and advances, the background abruptly is left plain white. Confused by this, Daffy turns to the animator and asks him to complete the background. He walks off the screen, and the animator fills in a new background that has nothing to do with the previous scene. Daffy returns and starts to repeat his opening scene, but quickly notices the different background and leaves, returning in a different costume and altering his performance to match the new scene. The animator substitutes several different, unrelated backgrounds, each time prompting Daffy to change costumes until the background finally disappears completely.

The animator draws a simple line-art background, then when Daffy asks for some color, paints Daffy himself in a bunch of random colors and patterns. Daffy angrily yells, "NOT ME, YOU SLOP ARTIST!!", and the animator quickly erases his body and redraws him as a bizarre mismatched animal with a "screwball" flag on its tail and a flower shaped head. Daffy walks around and talks to himself if he wasn't living up to his contract and soon becomes suspicious of this form, before the animator draws a mirror nearby and reveals his form and he scolds the animator for making him hideous and in respond, the animator erases Daffy and the mirror. Daffy is redrawn as a sailor, and as he begins to sing "The Song of the Marines", the animator draws an ocean background around him, without a boat. Daffy promptly falls into the water and emerges on a distant island. He asks for a closeup, then the camera crops out everything save for one small bit. Daffy annoying responds "This is a closeup? A CLOSEUP, YOU JERK! A CLOSEUP!!", then the camera zooms in to Daffy's angry eyes.

As he tries once again to negotiate with the animator, a black curtain falls on him. The animator draws a stick for Daffy to hold it up but it breaks and Daffy screams hysterically and rips apart the background, then becomes even more frustrated when he tries to say the episode needs to start. A "THE END" card appears, causing Daffy to yell "No...NO!" and pushes the end card away from the screen. Daffy apologizes to the presumed audience and dances for a moment while the film goes out of alignment, resulting in two Daffy Ducks on the screen. The two argue with each other and start to get in a fight, but the animator erases one of them just as the other takes a swing.

Daffy is drawn into an airplane, which he excitedly flies around in until a mountain is drawn in his path. The plane crashes off-screen, resulting in Daffy flying on his own with only the windshield in front of him. He "bails" out of the remains of his plane and floats downward with a parachute, which the animator replaces with an anvil. Crashing to the ground, Daffy is seen hammering on the anvil while dizzily reciting "The Village Blacksmith". The animator replaces the anvil with an artillery shell, which explodes after being struck by the hammer four times. After the explosion, Daffy finally snaps and angrily demands that the animator reveal himself. The animator draws a door in front of Daffy and closes it on him, then the camera draws back to reveal that the animator is Bugs Bunny at a drawing table, who says, "Ain't I a stinker?"

Influence in Other Works 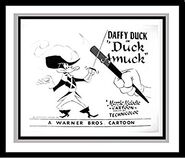 Daffy as a weird flower-headed creature

Daffy Duck and the black blob