The title is a play on "Easter eggs" and on "yegg", a slang term for a burglar or safecracker.

Bugs Bunny finds the Easter Rabbit sitting on a rock, crying. He tells Bugs that his feet are sore, so he cannot deliver the Easter eggs. Bugs takes up the job, not knowing that he was actually tricked into doing so. Once Bugs leaves, the Easter Bunny says that every year, he gets some "dumb bunny" to do his work for him.

The first house the "joyous bunny" visits bears a name by the door: Dead End Kid, and the mean little red-haired kid who lives inside throws the egg at Bugs' face, bites him and beats Bugs up before body slamming him on the floor. Bugs loses his cool and grabs the kid's arm. Unfortunately, Dead End Kid screams and three huge thugs (one of which is either a man dressed as a woman or is a woman with mannish features) rush in on Bugs while aiming guns at him. Bugs barely escapes the hail of bullets. The bullets even write out a message on the door "AND STAY OUT!" When Bugs rushes back to the Easter Bunny telling him he quits, the Easter Bunny urges him to "try once more."

Unfortunately, the next house is that of Elmer Fudd, the veteran wabbit-hater. Fudd sets up an elaborate welcome and, disguised as a baby, hides his gun in a bassinet and climbs in. Just then Bugs arrives, but this time he's prepared for toddler resistance: he cracks the egg in Elmer's hands. Thus commences the classic chase until Bugs manages to sic Dead End Kid on Elmer and the Kid beats Elmer on the head repeatedly with a hammer.

Finally, Bugs plants a bomb painted like an Easter egg and leaves it for the Easter Bunny. When he picks it up to finish his job, Bugs lights the fuse, proclaiming, "It's the suspense that gets me," and the bomb explodes on the Easter Bunny, leaving the hapless hen-fruit handler hanging high up in a tree. Bugs says, "Remember, Doc, keep smiling!" and starts laughing. 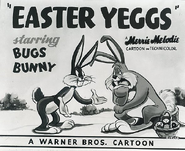 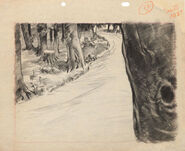 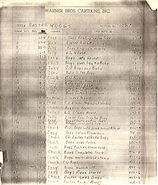 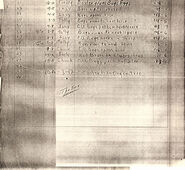 Retrieved from "https://looneytunes.fandom.com/wiki/Easter_Yeggs?oldid=195657"
Community content is available under CC-BY-SA unless otherwise noted.