Eatin' on the Cuff or The Moth Who Came to Dinner

Eatin' on the Cuff or The Moth Who Came to Dinner

Eatin' on the Cuff or The Moth Who Came to Dinner is a 1942 Looney Tunes short directed by Bob Clampett.

A live-action piano player (voice dubbed by Mel Blanc) sings and narrates. The moth character appears in both scenes, and in the final shot eats the guy's pants right off, sending him clumsily running off into the distance.

A wiseguy moth is preparing for his wedding day. "Here comes the groom, straight as a broom, all purtied up with ten-cent perfume"! He wakes up late, and after getting some breakfast at the bar, a few peoples' pant cuffs, he is held up by a Black Widow spider, who seduces him with a cigarette lighter. A wacky chase ensues. His bride-to-be, a bee, thinks he's ditched her and cries, until she realizes something might be wrong and comes to the rescue. "Confidentially, she stings!" 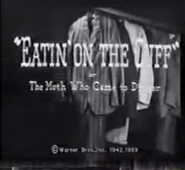