Energetic Egghead is bouncing around on a pogo stick, pretending to be a cowboy in his apartment room. His obnoxious cadence eventually annoys the clerk of the apartment complex and gets Egghead kicked out. As the clerk throws out all of Egghead's belongings, Egghead finds a newspaper ad for a wanted cowboy in Wyoming and runs to the post office to apply.

At the Bar-None Ranch in Wahoo, Wyoming, a group of cowboys are singing during the sunrise until they see the Pony Express drop mail. Upon opening the envelope, Egghead falls out and explains that he saw the advertisement and that he wants to get the job. The lead cowboy tells Egghead that he must shoot straight and ride horses to get the job.

For Egghead's first test, he must shoot at a cigarette, however, Egghead ends up nearly blasting the cowboy smoking it, causing the other cowboys to laugh at Egghead's misery. Next, Egghead must apply iron labeling onto a young calf, and ends up branding every cowboy but not the calf. He then takes on horse to catch the calf, and eventually corners the calf to the edge of the animal pen. Despite that, the calf, most spectacularly, ropes Egghead instead. The cowboys laugh again at Egghead's failure, causing Egghead, dejected and humiliated, to cry.

However, the lead cowboy decides to accept him as there's one job Egghead can do right. As Egghead chants his victory, he realizes that he is cleaning up after the cows and horses, and he says "Sweeps, again..." 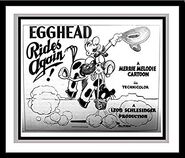