Elmyra Jessica Duff is a character on Tiny Toon Adventures. She was voiced by Cree Summer who also voiced Mary Melody. She is superficially based on her name derivative, Elmer Fudd. Though her love for animals could come from The Abonimable Snowman from the short "The Abominable Snow Rabbit".

Elmyra is a twelve-year-old red-headed tomboy. She wears a light blue, short-sleeved blouse with frilly white cuffs and a collar, a matching bow with a gerbil skull, white pleated knee-length skirt, frilly light blue (with or without red hearts), pink or white panties, a matching training bra, white ankle-length socks and a pair of shiny black Mary Jane shoes.

Elmyra is quite young and obsessed with animals and cute things. This is in contrast to Elmer, who despite being well armed with actual intent to violence, is unable to pose a threat. Her mentor and favorite teacher at school is Elmer Fudd.

This danger is balanced by her complete and utter gullibility. As explained in the pilot episode, Buster Bunny and Babs Bunny insist she's a pushover (unlike Montana Max), but needed nominal 'villains' to pitch their series. Her abject stupidity is pocked with occasional instances of cleverness, and her character is toned down as needed.

Besides animals, Elmyra also dotes her affections on Montana Max. The relationship appears to be one-sided, although in at least two episodes ("Prom-ise Her Anything" and the "My Dinner With Elmyra" segment of "Love Dis-Connection"), Max admits he actually does like her.

Elmyra's previously unmentioned family appeared in two episodes, the first of which was originally written as the pilot for a spin-off series that was then canned. Her family consisted of:

Elmyra's family (with the exception of the maid) made only one reappearance, in the third season episode "Grandma's Dead" (the title referring to one of Elmyra's hamsters, whom she has named after The Brady Bunch).

One of the animals in her vast menagerie is Byron Basset, a near-gelatinous basset hound who appeared sporatically on Tiny Toons and drew most of his humor from his odd appearance. In contrast to her other pets, Byron seems to feel a grudging love for his owner despite her clumsiness. Less enthusiastic pets have included several of the regular cast, including Furrball.

When Tiny Toons gave way to Animaniacs in 1993, Elmyra made a starring role in a segment titled "Lookit The Fuzzyheads". There, Elmyra is another patient of Dr. Scratchansniff's, and she proceeds to chase Yakko, Wakko and Dot around the Warner Bros. studio. The Warners eventually manage to foil her by getting her to chase Mindy, causing her to take quite a beating in the process (and at the same time saving Buttons the trouble of the chase).

Elmyra later acquired the newly-homeless Pinky and the Brain, now on the run from a Christopher Walken-esque madman intending for his own world-domination plans, in Pinky, Elmyra, & The Brain, a short-lived series in 1998. As a running gag, she would frequently wash Brain's mouth with soap whenever he spouts a soliloquy of technical jargon she does not understand (she calls this "naughty-waughty potty talk"). Infamously, this series retooled the world around Elmyra and did not feature any of her old co-stars from Tiny Toons, not even her family. In addition to the obvious change of her going to Chuck Norris Grammar School rather than Acme Looniversity, she romantically pursued Rudy Mookich (what exactly happened to Montana Max was never explained) and was often put through peer pressure by classmate Vanity White. Elmyra also gained a rival in the form of her "cousin" Patty Ann, who was actually little more than a mechanical suit operated by Brain; obviously, Elmyra could not figure out Patty Ann's true identity. Perhaps because of these inconsistencies in relation to Tiny Toons, the series was disliked by many and cancelled after one season.

She once had her clothes and her hair burnt off by The Flame in "When You're Hot..."

The two have several episodes showing them either dating or associating with one another. At first Montana Max seems hostile when he is forced to take Elmyra on a date in "My Dinner With Elmyra" but, when it comes to dropping off Elmyra at her house it shows after being kissed by Elmyra that he is in love with her. Some fans believe that in the future Elmyra will be the most likely character to be Montana Max's wife but, it never came in to play.

Elmyra with Pinky and The Brain 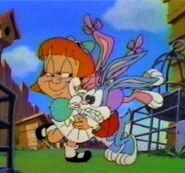 Elmyra trying to impress Rudy on Pinky, Elmyra and The Brain 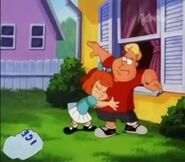 Elmyra with Yakko, Wakko, and Dot

Retrieved from "https://looneytunes.fandom.com/wiki/Elmyra_Duff?oldid=207977"
Community content is available under CC-BY-SA unless otherwise noted.