Emily the Chicken is a minor Merrie Melodies character created by Friz Freleng. She appears only in three cartoons: 1936's Let It Be Me, Boulevardier from the Bronx and 1938's A Star Is Hatched.

Emily was voiced by Berneice Hansell in her 1936 appearances and Elvia Allman (impersonating Katherine Hepburn)[1] in "A Star Is Hatched". In the former two, she had a more childlike voice, while in the latter, she had a more mature voice.

According to the ToonHeads episode "Emily the Chicken", Emily the Chicken is said to be the precursor to Miss Prissy from the Foghorn Leghorn cartoons. In the same episode, Toonheads describe her as "the Lil'Abner of the poultry world" and an "aww-shucks starstruck country hen who is constantly attracted to the bright lights of the big city". With attractive looking legs, she often gets a poor judgement of stardom and gets into trouble, causing her lovesick hick rooster boyfriend Clem to save her. In both Let It Be Me and A Star is Hatched, she blindly pursued her dreams of being a star, only to be rejected. Despite that she initially turn down Clem's affections in favor of stardom in these two cartoons, he still forgives and accepts Emily after her dreams fail. 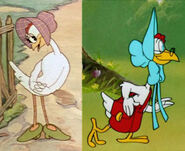