Enter the Devil is an episode of Taz-Mania. It first aired 2 Nov 1991.

The title is a play on the 1973 Bruce Lee film Enter the Dragon.

After watching a martial arts film, Taz wants to be a kung-fu master. When the stars of the movie happen to drive by, Mr. Thickley says they're no match for Taz. The smaller one of them easily clobbers Taz, so Mr. Thickley begins to train him. Several gags later they rematch and it's pretty much a draw, so it's up to Mr. Thickley to beat the bigger man, at tiddlywinks! 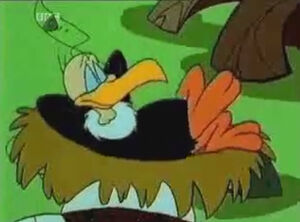 Add a photo to this gallery
Retrieved from "https://looneytunes.fandom.com/wiki/Enter_the_Devil?oldid=163377"
Community content is available under CC-BY-SA unless otherwise noted.