The family dog lazes on the porch, springing to alertness when the newspaper arrives. The dog makes a mad dash to the end of the driveway, gets the paper, comes back to the porch, and immediately starts to read the paper himself, starting with the Sunday comics. In Blanc's early version of Barney Rubble, he says, "I just can't wait to see what happens to Dick Tracy today!"

A hen leaves her eggs unguarded, and a mean-looking weasel stealthily creeps into the henhouse while the narrator frets. Just as he is about to grab the eggs, they all hatch at once, and the chicks shout "BOO!" in unison. The frightened weasel evokes a Joe Penner catch-phrase, "Don't ever DOOO that!" and gasps as his heart pounds.

A group of birds put a little twig, a bit of string, and piece of straw until they make a house approved by F.H.A. (Federal Housing Administration), singing, "There's no place like home!"

A group of ants is coming and going at an anthill. The camera and mike zoom in to allow the viewer to see and hear as a mother summons her son: "Hen-REEEE!" "Coming, Mother!"

A mouse mentions that he is kind to the cat he's snuggling against, and nods with the narrator's observation they're friends. When asked by the narrator if he has anything he'd like to say to his friends in the audience, the mouse yells, "GET ME OUT OF HEEEEEEEEERE!"

A recurring gag has six piglets eagerly watching an alarm clock. When it finally hits six o'clock, one of the pigs yell "Dinnertime!" and they dash off to their mother, to the tune of the military bugle call "Mess Call". She braces for the onslaught as the sucklings pile into her side. The mother pig has a rather dejected face and speaks in the manner of ZaSu Pitts, "Oh, dear... every day, it's the same thing!"

Original titles from a 16mm print 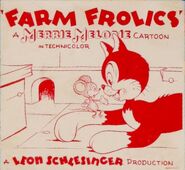