Fast and Furry-ous is a 1949 Looney Tunes short directed by Chuck Jones.

The title is a pun on the phrase "fast and furious."

Road signs are uprooted by a burst of speed. Each subsequent sign is accompanied in the confusion by the previous one. Ultimately, Road Runner is seen running on a road through a desert. Suddenly, the frame freezes, and the words "Road Runner (Accelleratii Incredibus)" appear at the bottom of the screen. The frame continues in slow motion, and Road Runner gives his signature "Beep, beep" before he speeds up and runs off the screen. He continues to dash along several roads. To the right, Wile E. Coyote looks down on the Road Runner with binoculars. The frame once again freezes, and the words "Coyote (Carnivorous Vulgaris)" appear as he licks his lips. He then runs off behind a rock, where he digs out a napkin (which he ties around his neck), a fork, and a knife.

Coyote runs down the hill and catches up to Road Runner. He takes several stabs at the bird with his fork and knife but misses. Road Runner turns his head, sticks out his tongue, and runs off, giving off another "Beep, beep." Coyote slows down and drops his knife and fork. His chin lowers down to the floor in amazement. He picks his chin back up and paces, thinking. He gets an idea, picks up his utensils, and runs off.

A box is lying against a rock with the words "One Genuine Boomerang Guaranteed to return" written on it. Coyote is holding the boomerang. He throws the boomerang off-screen, but is instantly hit by another one. To the right, Road Runner has a box that says "Another Genuine Boomerang Guaranteed to Return." He gives a "Beep, beep," and runs off. As Coyote prepares to follow, he is hit by his own boomerang.

Coyote paints two parallel lines on the road with white paint and puts up a sign that says, "Slow School Crossing." He then dresses like a schoolgirl and merrily skips along the road. He is instantly hit by the Road Runner and is sent to the ground. Road Runner comes back in a woman's wig. He holds a sign that says, "Road Runners can't read." After sticking out his tongue, Road Runner runs off with yet another "Beep, beep."

Road Runner is running up a hill. The coyote is strapped to an abstrusely designed rocket. Coyote lights a match and sets the rocket's ignition fuse on fire. Coyote gives a sinister grin as the rocket ignites. But then, the rocket suddenly explodes, but it doesn't take off after the Road Runner. It instead launches upwards, crashing into an overhanging cliff with Wile E. stuck head first through the cliff.

A string with a diamond at the end is hanging over the road. Coyote is on a cliff, standing next to a huge boulder. Coyote runs to a piece of paper, which appears to be a blueprint for his plan. It reads, "1. Pull out key stone. 2. Rock falls. 3. Road Runner (with an arrow pointing to a roughly drawn Road Runner as he runs along the road). 4. Road Runner crushed! (Ha Ha!)" Running off yet again, Coyote looks through a telescope to see Road Runner coming. He then rushes to the boulder. Pulling out the string, he stands and watches with glee as the rock starts to fall towards the road. Suddenly, the boulder reverses its direction and lands on top of Coyote.

The coyote is seen painting a white line along the middle of the road. He turns to the left, still painting, and makes his way towards a cavern wall. He then paints the wall so it looks like a tunnel. He hides behind a rock as the Road Runner comes. Giving several beeps, Road Runner runs straight through the painting, as if it was real. Coyote is amazed and also tries to run through it, but instead bangs into the wall. Road Runner comes back and runs over Coyote as he gives a "Beep, beep."

Road Runner is running along the road once again. A stick of dynamite is hidden under rock and is connected to a TNT box. Coyote stands behind the box. Hearing the "beep"s of Road Runner, he presses down on the box, which explodes as Road Runner stands watching by the stick of dynamite. Giving some beeps, he runs off.

An open box with a lid that says "ACME Super Outfit" is seen lying on the ground. Coyote is seen wearing an outfit that consists of a blue shirt and pants and a red cape. He starts to jog, then speeds up into a run. He runs off of a cliff with his hand stretched out as he attempts to fly, but he fails to defy gravity and instead drops to the ground.

An open wooden box has the word "Refrigerator" printed on its side. To its left is a metal box with the words "Ace Electric Motor", then another wooden box with the words "Meat Grinder" printed on its side. Next to the wooden box is yet another box that reads "One Pair Skis." To the left of them, Coyote is wearing skis, with a refrigerator tied on his back. Turning on his contraption, the refrigerator starts to spew out ice cubes, which go through the meat grinder and onto the ground, forming snow. Hearing the beeps of Road Runner, he takes off. As he is about to hit the bird, Road Runner suddenly stops, right behind Coyote's path. Coyote runs off a nearby cliff, but is still skiing on ice. The refrigerator stops spewing ice just as Coyote is about to reach another cliff. He drops down to the ground in a cloud of smoke. He is crushed by the refrigerator, which starts spewing ice once more. Christmas music plays, and Coyote holds up a sign that reads, "Merry Xmas."

Another box bears the words "Fleet-foot Jet Propelled Tennis Shoes." A tennis shoe is next to this box. Strapping the shoe to his foot, Coyote starts to jog in place, then takes off at an amazing speed, stopping in the near distance. He then comes back at an equally fast pace. He runs off several more times, but eventually comes back to where he started. Just as he is about to take off once more, Road Runner appears in front of him. Sticking out his tongue and beeping, Road Runner takes off once more in a cloud of smoke. Coyote follows after him, but when the smoke clears, Road Runner is standing still. Coyote realizes he is chasing nothing and turns back around to stop a few inches in front of the Road Runner. Road Runner beeps twice and takes off in a cloud of smoke once more, as does Coyote. When the smoke clears, Coyote is standing still, expecting Road Runner to have done the same. But instead, Road Runner is nowhere to be found. Coyote chases after him. They come to a complex circle of roads, and they each take different routes, occasionally stopping to see where the other went. Coyote cannot find Road Runner, and stands scratching his chin, but he is promptly run over by the bird. He angrily pursues the bird. His shoes, however, gives out a couple sparks and sputters, and Coyote comes to a stop by a sign that reads "Short Cut" and points to the left. He runs down this path.

Wile E. Coyote, holding an axe, is standing behind a tall sign. Hearing the beeps of Road Runner he stands in the middle of the road and prepares to swing the axe. But instead of seeing Road Runner, he is run over by a bus. Road Runner is riding in the back of the bus. As he gives two more beeps, he pulls down a curtain that reads, "The End."

The version shown on ABC's The Bugs Bunny and Tweety Show cut the part where Wile E. Coyote plants dynamite in the road and gets blown up when he presses the detonator.[1] 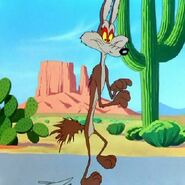 Retrieved from "https://looneytunes.fandom.com/wiki/Fast_and_Furry-ous?oldid=202651"
Community content is available under CC-BY-SA unless otherwise noted.