Fastest with the Mostest

Fastest with the Mostest

Fastest with the Mostest is a 1960 Looney Tunes short directed by Chuck Jones.

The title is a reference to the epigram "Git thar fustest with the mostest", often erroneously contributed to Nathan Bedford Forrest.[1]

Wile E. Coyote sneaks up on a firework and lights it, hoping for it to explode when Road Runner passes over it, but it explodes instantly. The credits appear within the dust, and the coyote's Latin name (Carnivorous slobbius) is visible after they disappear. Road Runner, significantly late to the party, zooms into view with the name Velocitus incalcublii. The action resumes and both characters begin the chase. Wile catches up to Road Runner and passes him, but on his side. Wile continues to move further from Road Runner until signaled. Then, as he is looking backwards, he fails to spot the end of the cliff and suffers gravity. Determined, the coyote shakes it all off and climbs the cliff in sections, visibly straining himself. Finally, he hangs on to the very edge and pulls himself barely up onto the end of the cliff. Road Runner, out of pure sadism, has waited until now to beep Wile off the cliff and sideways into thin air. Wile E. looks backwards and soon deduces the situation, resulting in a second date with gravity.

1. Wile has a simple new plan: Drop a bomb on Road Runner from a hot air balloon. However, when the coyote inflates the balloon with his mouth, the balloon inflates the coyote instead and Wile floats through the air, just grabbing the bomb before he deflates and flies randomly through the sky. When all the air leaves him, Wile sighs with relief until he sees he is holding the bomb. He lets go of it, only to realize he is also falling! This he attempts to alleviate by increasing his drag, but slows himself enough that the bomb catches up to him. Now, Wile has to speed back up, all the way back down to the ground, and then strategically hide to avoid the bomb; however, underneath a low arch is exactly where the bomb lands. Thinking fast, the coyote spots the bomb's end poking through the rock and hears it "ticking", and thus unscrews the head and takes out the explosive. The bomb's clock stops ticking, but a relieved Wile is blown up when it abruptly starts ticking again.

in an effort to get Road Runner to stop. Road Runner obligingly munches while the coyote prepares to lower a bucket to trap Road Runner. However, he steps on the bucket and cannot keep his foot out of it. Finally, he falls down and has to hold onto the string to stay up, then ends up twisted inside the bucket. The coyote unties the rope, but then sees that was the very rope holding himself up. He hides in the bucket prepared for impact, when by fortune it hangs itself up on a tree branch. Wile relaxes hunched in the bucket until the excessive weight on one side causes the coyote to fall out again and down to the ground. Road Runner provides a convenient spring, and Wile thanks his rival with a small "THANKS" card as he is bounced directly up into the first branch and is hung up by the wire.

3. Wile hammers a Detour sign into the road, directing Road Runner to go down a very dangerous outcropping. Road Runner stops at the very edge, and the coyote follows, trapping the bird. Wile licks his lips, prepares his utensils and walks toward Road Runner to eat him, but the thin outcropping breaks and sends Wile to the ground, dejected, and leaving Road Runner standing on a floating piece of rock. As if that wasn't enough, his own utensils follow him down, scrape the skin off his back, and spear his tail, despite his efforts to avoid them. The coyote leaps all the way into the air and rejoins his napkin, and both are hung up on another branch. The entire tree then falls down, pounding the coyote through the ground and into a waterfall. Wile cannot fight the flow, and is swept downstream, under a bridge, and through an entire network of progressively thinner pipes before his arm protrudes out of a spigot. He twists the spigot and the rest of himself comes out, leaving Wile staring at Road Runner, still standing on the floating piece of rock. Wile, depressed and embarrassed, holds up a sign to Road Runner and the audience: "I wouldn't mind - except that he defies the law of gravity!" The camera cuts to Road Runner's response on a second sign: "Sure - but I never studied law!" Road Runner speeds off the floating rock onto a safe haven to the right. 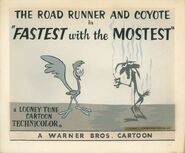