Feed the Kitty is a 1952 Merrie Melodies short directed by Chuck Jones.

Marc Anthony tries to scare off a cute little kitten and stares confused, wondering why the feline did not run, only to realize the kitten is not scared of him, instead using him as a bed and resting on his back. The dog falls for it and decides to adopt it and to bring it home.

Upon his arrival, his human owner, tired of picking up his things, warns him not to bring one more thing inside the house. He hides the kitten under a bowl and it walks away, scaring the woman as she thought it was a mouse. Marc Anthony finds the bowl leaning against a mouse hole in the wall and reaches in to retrieve the kitten, not realizing he's grabbed a mouse until he notices the cat eating out of his dish. He gives the mouse a nasty look and throws it back into its hole.

He follows the kitten into another room where she starts playing with a ball, but then stumbles and bumps the woman's foot. Marc Anthony grabs a key from a wind up car and pretends the kitten is a windup toy. His owner tells him to keep the "toy" out of her way. He kisses her foot and zips out of the room. He then notices the kitten sitting in the wind up car, which starts to zip back and forth. The car goes under the carpet and he attempts to retrieve it before it bumps into the woman only to accidentally grab her shin, which makes her scream. He then sees the kitten climb up the dresser. When the mistress demands to know what it is, he zips over and pretends the kitten is a powder puff by patting his face with it and doing a dance.

He takes the kitten into the kitchen and disciplines her. He hears the woman coming and barely has time to hide the kitten in a flour bin and try to look innocent before she enters the kitchen. His mistress asks what he's up to and says he looks very guilty. She pushes him into his basket with a broom and tells him to stay there, as she does not want any foolishness while she is baking cookies. Terrified, he looks on as she takes some flour out of the bin to bake the cookies, with the kitten inside the measuring cup as well. The kitten is poured into the mixing bowl without the lady realizing it. Marc Anthony tries to remove the kitten while the lady is getting milk from the refrigerator and she hits him with a spoon, thinking he's trying to steal batter. Marc Anthony unplugs the mixer before she can pulverize the poor kitten. As the lady is about to turn on the mixer, Marc Anthony grabs a can of whipped cream from the refrigerator, to spray on his face and pretend to have rabies. Tired of the dog's antics, his owner throws him out of the house while, unseen, the kitten extracts herself from the bowl, sits behind a box of soap flakes and licks the batter off.

In the backyard, the bulldog watches through a window as the cookie dough is mixed, rolled and cut before being put in the oven, unaware that the kitten is perfectly safe and out of harm's way elsewhere, and cries a pond. The lady tells him he's been punished enough and lets him back in. Sobbing and heartbroken, he barely finds the strength to take the cat-shaped cookie his owner gives to him and place it lovingly on his back where his kitten used to rest.

He then breaks down crying as the kitten appears in front of him. Only then, does he hear the little mews of the feline right in front of him, she nuzzles up to him as he excitedly kisses the kitten in relief as his owner realizes he has a pet. He tries the same tricks he used before to pretend it was something else earlier, but she is wise to this. He finally begs his owner to let him keep the kitten. To the dog's surprise, she allows him to keep the kitten as long as he takes care of her.

Once again, Marc Anthony tries to be strict with the kitten but her playful nature defeats him. She goes to sleep on Marc Anthony's back as the content dog smiles, wrapping her up in a fur cover blanket. 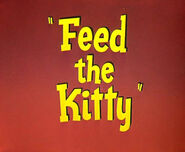 Feed the Kitty (Music & SFX Only)