The title is a play on the children's nursery rhyme "Pop Goes the Weasel".

A mother bird is trying to catch a worm for her soon-to-be-hatched baby. While she is away, a weasel steals the egg for his breakfast. Unfortunately, the egg hatches, and it mistakes the weasel for its mother. 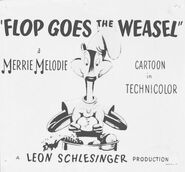