For Scent-imental Reasons is a 1949 Looney Tunes short directed by Chuck Jones.

A happy man rides his bicycle through Paris, greeting all the people he encounters, and singing "The Happy Can-Can Song" (created by Looney Tunes). He arrives at his shop, a perfume store, and unlocks his store's door.

After peering into the store, he immediately runs away. He shouts out in a panic and runs up to a gendarme for assistance, yelling unintelligible phrases, presumably in French. The gendarme looks into the shop and it is revealed that Pepé Le Pew is inside the store, smelling the various types of perfumes and singing to himself in French. The gendarme looks terrified as he speaks in his French accent about the terrible odor, which is indicated by brownish "fumes" emanating from Pepé Le Pew's tail. The gendarme runs away and the perfume store owner cries out that he will now be bankrupt, Penelope Pussycat begins to console him by winding around his legs and saying, "Le meow, le purr."

The storekeeper picks up Penelope and orders her to remove the skunk from the premises, then throws her into the store. Penelope slides across the floor and bumps into the leg of a table, knocking a bottle of white hair dye over. The hair dye drips down onto Penelope's tail and runs in a straight line down to her head, resulting in a white stripe down her back. Pepé Le Pew immediately sees her and mistakes her for a female skunk. Penelope smells Pepé's odor and tries to run away, but Pepé runs after her, shuts the shop door, and embraces Penelope. Penelope attempts to wiggle free as Pepé tells her things such as, it is love at first sight, and "we will make beautiful music together." Just before Pepé tries to kiss her, Penelope gets free and runs away. Penelope climbs into the sink in an attempt to wash the stripe off but is unsuccessful. She runs to a window and tries to open it, but it is stuck. She runs away, and Pepé finds her inside a glass cabinet. They mime to each other, Pepé trying to get Penelope to come out, and Penelope refusing, indicating that it is due to his odor.

Pepé Le Pew pulls out a gun and holds it up to his head, then weakly waves to the surprised cat as he walks out of Penelope's line of sight. Then the sound of the gun goes off, as a panicked Penelope rushes out of the cabinet to Pepé. Pepé says, "I missed, fortunately for you," and begins kissing Penelope Pussycat. Penelope runs away and Pepé chases her, bouncing happily around the room. Pepé Le Pew finds Penelope on the windowsill and says that Penelope is trying to prove her love for her by committing suicide, but that he will save her. Pepé runs over and grabs Penelope but drops her, and they both fall out of the window. Pepé Le Pew falls into a blue paint can and Penelope falls into a barrel of water. When Pepé climbs out, he is blue but no longer smelly, and he sees the ragged-looking, sneezing wet cat beside him (who no longer has a white stripe down her back) and asks her if she has seen a beautiful young lady skunk. He goes off to find her.

As he calls out Penelope watches him, noticing how the paint makes him look handsome, and falls in love with him as her heart begins to beat against her chest. She runs after him and locks him in the perfume shop again, placing the key in her chest. Not recognizing her, Pepé Le Pew tries to discourage her, then runs away. As Penelope chases after Pepé Le Pew, Pepé says, "You know, it is possible to be too attractive!" 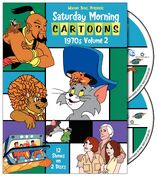 The version shown on ABC's The Bugs Bunny and Tweety Show cuts out three suicide references:

Cartoon Network and Boomerang initially aired this short uncut from 1999 to 2002 (despite both channels being prone to editing out jokes and references to suicide, especially if they include someone putting a gun to his head or, in the case of the two lines that got cut on ABC, anything that is liable to condone or glamorize suicide). However, from 2003 to 2010, the glass case suicide part was edited similar to ABC's version.[1] The Cartoon Network version also cut Pepé's line about how Penelope is committing suicide to prove her alleged love for him, his thinking it's a sweet gesture, then reconsidering and stopping it, though the "Vive l'amour! We die together" line was not edited ("A Scent of the Matterhorn" had a similar scene of the female cat threatening to jump, Pepé mistaking it for a suicide, and thinking it's sweet [only in the latter cartoon short, he thinks it's a turn-on, not a gesture he must stop] that was never edited to remove suicide references when aired on Cartoon Network or Boomerang, making Cartoon Network's decision to edit this scene from this short hypocritical).[1] Since 2011, this short was once again shown uncut and uncensored on Cartoon Network and Boomerang [1], though the version currently airing is the time-compressed PAL version and not the NTSC version played at normal speed.

"When we were writing Odor-able Kitty, in which Pepé made his first appearance (under the name Henry), the odious Eddie Selzer [the producer at Warner Bros. Cartoons] tried to block the project on the grounds that skunks talking French are not funny. (The French themselves find these cartoons very funny.) But when "For Scent-imental Reasons" later won an Academy Award, Eddie Selzer contentedly collected the credit and the Oscar, which he took home."

For Scent-imental Reasons on the SFX Resource Wiki