Foxy by Proxy is a 1952 Merrie Melodies short directed by Friz Freleng.

Hunters on horses blow horns to awake fox-hunting dogs. A number of smaller hounds come out of a giant dog house, followed by a large fox hound who is excited by the prospect of the hunt- especially the moment where the fox's tail is to be cut off. The hunters and dogs then pass over Bugs' hole, waking him, with the larger fox hound lagging behind. Once Bugs directs the larger fox hound to where the others went, Bugs digs out a fox costume he had from his hole and begins to play tricks with the large fox hound, leaving Bugs amazed at the dog's inability to recognize a rabbit from a fox. Once the large hound realizes the difference, he runs back to the tree where Bugs was standing, only to find Bugs undressed. The rabbit giggles at the dog's intelligence, declaring, "I've seen better heads on a glass of root beer!"

At this point, Bugs, with his fox costume back on, stamps fox tracks to mislead this hound, which lead to train tracks, which the dog continues to follow. When the dog finally reaches Bugs in costume and tries to get him, Bugs questions what kind of tracks the dog was following, which ends up putting the dog on the front of a locomotive, while the dog exclaims that he caught a train.

Meanwhile, the other dogs have caught up to Bugs in his costume, and he tries to evade them, but to no avail. When he reveals that he is a rabbit, one of the dogs declares that they are now after rabbits. After a short chase, which includes Bugs running through an open log, Bugs then runs back into the log, and while the dogs run into it, Bugs turns the log three times to ensure that the crowd of dogs always run off the cliff, with the crowd falling to the ground after the third turn. While Bugs is chuckling at their misfortune, the large fox hound sneaks up behind Bugs, cuts Bugs' tail off, and runs away with it. Bugs shrugs and says, "Just call me Stubby!" He walks away, his cottontail missing. 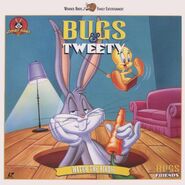