Frank Tashlin started his career in the early 1930s after looking for a job via dropping high school. He was hired by Schlesinger, who welcomed his talents. Tashlin directed a lot of Porky films back in the 30s and 40s and most of the Merrie Melodies from 1937-38. He first quit in 1938 after a dispute with a worker, and after he refused to show Schlesinger some of his new comics, causing his unit at the time to be taken over by Chuck Jones. He would return to Warner Bros. in 1942 using Bob Clampett's and Norman McCabe's old unit, directing the last set of black-and-white Looney Tunes cartoons. His last cartoon was "Hare Remover", for which he was uncredited in the short, as he left Warner Bros in 1944 to direct some live-action films, specifically the Jayne Mansfield vehicle The Girl Can't Help It and most of Jerry Lewis' solo comedies, and his unit was eventually taken over by Robert McKimson.

In 1946, Tashlin published a children's book, The Bear That Wasn't. About twenty years after the book was released, the story was adapted for television by MGM Animation Studios, directed by Chuck Jones. 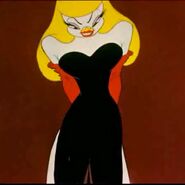 Frank as a young teenager

Frank with his wife Mary Costa