Freddy the Freshman is a 1932 Merrie Melodies short directed by Rudolf Ising.

Freddy the Freshman, "the freshest kid in town" and a canine "big man on campus", crashes a college pep rally, and becomes the star of the big campus football game.

(1992) LaserDisc
The Golden Age of Looney Tunes, Volume 3, Side 7
Add a photo to this gallery

When this cartoon aired in the late 1990s on Cartoon Network's show Late Night Black and White (an installment show featuring black and white shorts from Warner Bros. and Fleischer Studios), the brief shot of the cheerleaders (three stereotypically Jewish birds - with beak noses and pennants written in Hebrew - and a rooster in a tuxedo who acts stereotypically homosexual) during the game was cut.[1] 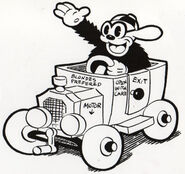 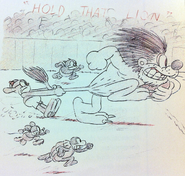 Layout Drawing
Add a photo to this gallery

Retrieved from "https://looneytunes.fandom.com/wiki/Freddy_the_Freshman?oldid=269343"
Community content is available under CC-BY-SA unless otherwise noted.