He appears in three cartoons opposite Claude Cat, all of which were directed by Chuck Jones.

Frisky Puppy is a playful puppy who often spends his time hysterically barking and scratching. Although not intentionally malicious, his barking often frightens Claude Cat and drives him crazy.

He bears a striking physical resemblance to Charlie Dog (another Chuck Jones-created pooch), but is not the same character.

Frisky makes his first appearance in 65 years in the New Looney Tunes episode "Puppy's Got Claws", where he foils Sylvester, Claude Cat and Pete Puma's attempts at stealling food from Granny's house. 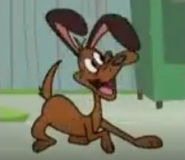