Isadore "Friz" Freleng (21 August 1905 - 26 May 1995) was one of the earliest directors of Looney Tunes. He and fellow director Chuck Jones dominated the Warner Bros. animation studio after Leon Schlesinger left in 1944.

The nickname "Friz" came from his friend, Hugh Harman, who initially nicknamed him "Congressman Frizby" after a fictional senator who appeared in satirical pieces in the Los Angeles Examiner. Over time, this shortened to "Friz".[1]

Freleng was born in Kansas City, Missouri, where he began his career in animation at United Film Ad Service. There, he made the acquaintance of fellow animators Hugh Harman and Ub Iwerks. In 1923, Iwerks' friend Walt Disney moved to Hollywood and put out a call for his Kansas City colleagues to join him. Freleng, however, held out until 1927, when he finally moved to California and joined the Walt Disney studio. He worked alongside other former Kansas City animators, including Iwerks, Harman, Carmen Maxwell, and Rudolph Ising. While at Disney, Freleng worked on the Alice Comedies and Oswald the Lucky Rabbit cartoons for producers Margaret Winkler and Charles Mintz.

Freleng soon teamed up with Harman and Ising to try to create their own studio. The trio produced a pilot film starring a new Mickey Mouse-like character named Bosko. Looking at unemployment if the cartoon failed to generate interest, Freleng moved to New York City to work on Mintz' Krazy Kat cartoons, all the while still trying to sell the Harman-Ising Bosko picture. The cartoon finally sold to Leon Schlesinger, who soon secured Harman and Ising to star Bosko in the Looney Tunes series he was producing for Warner Bros. Freleng soon moved back to California to work with Harman and Ising once again.[2]

Harman and Ising parted ways with Schlesinger over disputes about budgets in 1933. Schlesinger was left with no experienced directors, and therefore lured Freleng away from Harman-Ising to successfully fix cartoons directed by Tom Palmer, which Warner Bros rejected. The young animator became Schlesinger's top director, and he introduced the studio's first true post-Bosko star, Porky Pig, in the 1935 film "I Haven't Got a Hat". The film is notable for being one of the earliest examples of characterization in a cartoon. Porky was a distinctive character, unlike Bosko or his replacement, Buddy.

As a director, Freleng gained the reputation of a tough taskmaster. His unit, however, consistently produced high quality animated shorts under his direction.

In 1937, Freleng left Schlesinger's after accepting an increase in salary to direct for the new Metro-Goldwyn-Mayer cartoon studio headed by Fred Quimby. To Freleng's chagrin, he found he would be working on The Captain and the Kids, adapted from the popular comic strip The Katzenjammer Kids. The series failed to achieve much success, much as Freleng had predicted.[3] Though skillfully animated, the characters could not compete with the "funny animals" that prevailed at the time.

Back with Schlesinger and Warner Bros.

Freleng happily returned to Warner Bros. when his contract ended in late 1939. One of the first Looney Tunes cartoon shorts directed by Freleng during his second tenure at the studio was "You Ought to Be in Pictures", a cartoon short which blended animation with live-action footage of the Warner Bros. studio (and of Schlesinger veterans such as story man Michael Maltese and even "Leon" himself). The plot, which centers around Porky Pig being tricked by Daffy Duck into terminating his contract with Schlesinger to attempt a career in features, echoes Freleng's experience in moving to MGM.

Schlesinger's hands-off attitude toward his animators allowed Freleng and his fellow directors almost complete creative control and room to experiment with cartoon comedy styles, which allowed the studio to keep pace with the Disney studio's technical superiority. Freleng's style quickly matured, and he became a master of comic timing. Often working alongside layout artist Hawley Pratt, he also introduced or redesigned a number of famous Warner characters, including Yosemite Sam in 1945, the cat-and-bird duo, Sylvester and Tweety in 1947, and Speedy Gonzales in 1955.

Friz Freleng and Chuck Jones (In fact, Freleng actually was the one who hired Jones[4].) would dominate the Warner Bros. studio in the years after World War II, Freleng largely concentrating on the above-mentioned characters and Bugs Bunny. Freleng continued also to produce modernized versions of the musical comedies he animated in his early career, such as The "Three Little Bops" (1957) and "Pizzicato Pussycat" (1955). Freleng won four Oscars during his time at Warner Bros., for the films "Tweetie Pie" (1947), "Speedy Gonzales" (1955), "Knighty Knight Bugs" (1958), and "Birds Anonymous" (1957). Other Freleng cartoons such as "Sandy Claws" (1955), "Mexicali Shmoes" (1959), "Mouse and Garden" (1960), and "The Pied Piper of Guadalupe" (1961) were Oscar nominees.

Freleng's cartoon "Show Biz Bugs" (1957), with Daffy Duck vying with Bugs Bunny for theatre audience appreciation, was arguably a template for the enormously successful format to The Bugs Bunny Show that premiered on television in the autumn of 1960. Further, Freleng directed the cartoons with the erudite and ever so polite Goofy Gophers encountering the relentless wheels of human industry, them being "I Gopher You" (1954) and "Lumber Jerks" (1955), and he also directed three cartoons (sponsored by the right-wing Alfred P. Sloan Foundation) extolling the virtues of free-market capitalism, said cartoons being "By Word of Mouse" (1954), "Heir-Conditioned" (1955), and "Yankee Dood It" (1956), all three of which involved Sylvester. Freleng directed all three of the vintage Warner Brothers cartoons in which a drinking of Dr. Jekyll's potion (of The Strange Case of Dr. Jekyll and Mr. Hyde) induces a series of monstrous transformations, "Dr. Jerkyl's Hide" (1954), "Hyde and Hare" (1955), and "Hyde and Go Tweet" (1960) being those three cartoons. Other Freleng fancies were man at war with the insect world (as in "Of Thee I Sting" (1946) and "Ant Pasted" (1953)), an inebriated stork delivering the wrong baby (in "A Mouse Divided" (1952), "Stork Naked" (1955), and "Apes of Wrath" (1959)), and characters marrying for money and finding themselves with a shrewish wife and a troublesome step-son ("His Bitter Half" (1949) and "Honey's Money" (1962)).

Freleng was occasionally the subject of in-jokes in Warner cartoons, with billboards in the background of scenes advertising various products called "Friz" in "Canary Row" (1950), the "Hotel Friz " in "Racketeer Rabbit" (1946), and "Frizby the Magician" in "High Diving Hare" (1949) as one of the acts Bugs Bunny is pitching.

Freleng was somewhat of a composer who, along with story man Warren Foster, would come up with a gag the best way possible by working on musical bar sheets. This way, Freleng wrote out the music and placed the right moment for the gag to appear. He was one of a very few directors at Warner Bros. to have musical knowledge of making cartoons.

Freleng left Warner Bros. Cartoons in November 1962, seven months before the studio closed, to take a job at Hanna-Barbera as story supervisor on their feature Hey There, It's Yogi Bear! After the Warner studio closed in May 1963, Freleng rented the same space from Warners to create cartoons with his now-former boss, producer Dave DePatie (the final producer hired by Warners to oversee the cartoon division), forming DePatie-Freleng Enterprises. When Warner Bros decided to reopen their cartoon studio in 1964, they did so in name only; DePatie-Freleng produced the cartoons into 1966.

After "The Pink Phink" won the 1965 Academy Award for Best Short Subject (Cartoons), Freleng and DePatie responded by producing a whole series of Pink Panther cartoons. Other original cartoon series, among them The Inspector, The Ant and the Aardvark, and Hoot Kloot, soon followed. In 1969, The Pink Panther Show, a Saturday morning anthology program featuring DePatie-Freleng cartoons, debuted on NBC. The Pink Panther and the other original DePatie-Freleng series would remain in production through 1980, with new cartoons produced for simultaneous Saturday morning broadcast and United Artists theatrical release.

DePatie-Freleng is credited with the creation of Frito-Lay's Chester Cheetah, on the Food Network show "Deep Fried Treats Unwrapped"; as well as creating the colored opening title sequence to I Dream of Jeannie. DePatie-Freleng also contributed special effects to the original version of Star Wars, particularly the animation of the lightsaber blades.

By 1967, DePatie and Freleng had moved their operations to the San Fernando Valley. Their studio was located on Hayvenhurst Avenue in Van Nuys. One of their projects featured Bing Crosby and his family called Goldilocks, and had songs by the Sherman Brothers. At their new facilities they continued to produce new cartoons until 1980, when they sold DePatie-Freleng to Marvel Comics, which renamed it Marvel Productions.

In 1986, Freleng stepped down and gave his position at Warner Bros. to his secretary at the time, Kathleen Helppie-Shipley, who ended up being the second-longest producer of the Looney Tunes and Merrie Melodies franchise, only behind Leon Schlesinger.

Friz Freleng died of natural causes in Los Angeles, aged 88. The WB animated TV series The Sylvester & Tweety Mysteries, and the Looney Tunes cartoon "From Hare to Eternity" (which was the last one directed by Chuck Jones), were both dedicated to his memory. Freleng is interred in Hillside Memorial Park Cemetery.

Speedy Gonzales (With help from Robert McKimson and Hawley Pratt) 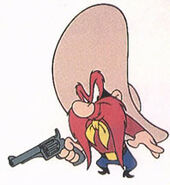 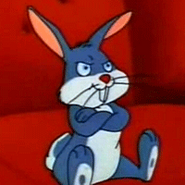 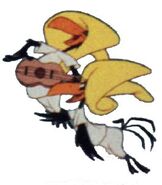 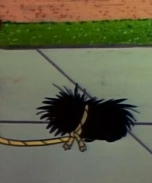 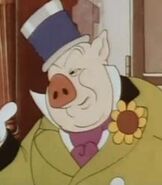 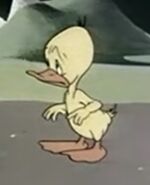 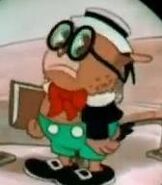 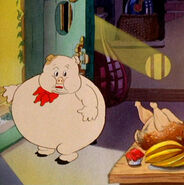 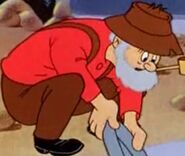 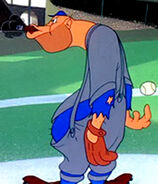 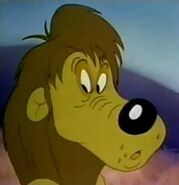 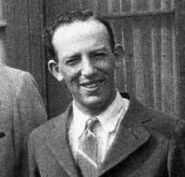 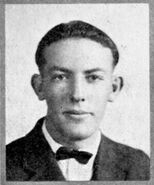 Friz at the Academy Awards with Mel Blanc and Chuck Jones 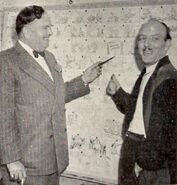 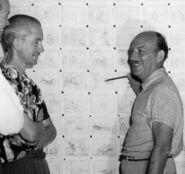 Friz with Johnny Burton, Robert McKimson, and Chuck Jones circa 1958

A tribute to Friz following his death with the Pink Panther 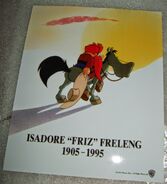 A tribute to Friz following his death with Yosemite Sam