George is an animated cartoon character in the Merrie Melodies series. Fox has only one major appearance, in the short "Of Fox and Hounds".

Once, George met a dumb hound, Willoughby, who repeatedly asks George where the fox went, never suspecting that his "friend" George is the fox. Invariably, George the Fox tells Willoughby that the fox is on the other side of a rail fence, which is actually at the edge of a steep cliff. Willoughby's line, "Which way did he go, George? Which way did he go?" long ago became a catchphrase, as did "Thanks a lot, George, thanks a lot!" 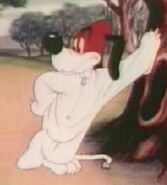 George disguised as a hound

concept art
Add a photo to this gallery

Retrieved from "https://looneytunes.fandom.com/wiki/George_the_Fox?oldid=204345"
Community content is available under CC-BY-SA unless otherwise noted.