"Yegg" is a slang term for a burglar or safecracker. The same play-on-words was used in the title of the 1947 Bugs Bunny cartoon "Easter Yeggs".

A golden goose lays a golden egg, but doesn't want credit for it, so when Porky finds the egg in his henhouse, the goose blames Daffy. Rocky and his gang hustle him back to their den and demand more output. Daffy tries to stall for time, at one point asking for surroundings that would make him more comfortable. Rocky and his henchmen oblige at first, but then demand the egg.

Daffy tries to stall for time, but is given five minutes to lay his egg or else. The duck tries various ways to escape his predicament, but is stopped at every turn. When time runs out, the gangsters stalk Daffy, only to find he really has laid a golden egg!

Daffy is relieved that he met Rocky's demand and will be allowed to go free... until Rocky escorts the duck into a room containing dozens of egg crates and orders him to "Fill 'em up!" Daffy moans, "Aw, my achin' back!" and faints.

(2003) DVD
Looney Tunes Golden Collection Volume 1, Disc Two (low pitch, due to the 1998 dubbed version being the source of the soundtrack) 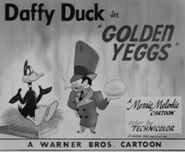