Presented in the mockumentary style of previous shorts narrated by Robert C. Bruce, the short begins at Stork, Inc. as the narrator describes how storks, aside from being symbolically the bird that delivers babies to their future homes, are jealously proud of their heritage. One stork, number 672, is busy drunkenly talking to a colleague about his then-recent delivery when he is called upon to deliver a (rather heavy) baby to Mrs. Giant at the top of a beanstalk.

After a long flight that leads to an exhausted stop in suburbia, he decides he can't fly any further to his destination with such a heavy delivery. Instead he decides to give it to John and Ethel, normal size parents who have to raise the giant baby. While they were overjoyed about the baby's "healthy appetite", we are shown they have to go through about 18 milk bottles, later 6 milk cans, to feed the baby. John is then seen playing with the baby as the narrator explains how the baby grew bigger as time passed; the baby ends up breaking John's leg as he bounces his false son with his knee.

Before long, the baby ends up outgrowing his bassinet and has to sleep in John and Ethel's bed. While Ethel is worried their son might fall out, John assures her their son can't hurt anything but the floor. They then go through truckloads of oatmeal, baby oil, and extra large diapers, described by the narrator as the large amount of care that goes into taking care of a baby in regards to feeding and the little things to keep them happy. Ethel quickly gets around the problem of giving their giant son a bath by bathing him in their swimming pool. One morning, as the narrator describes how a mother can solve the problem of teething quite simply, John wakes to see, to his shock, Ethel is giving their son his car's whitewall tires to use for a teething ring. Ethel agrees to let him have them if he can show her where to find a teething ring of the same size. The giant baby is then seen taking his first steps, with Ethel encouraging him to walk towards John. However, the baby ends up falling right on top of John, who demands Ethel to get their son off of him. Later, when John's car fails to start up, he asks Ethel to send out Junior to give the car a push, as the narrator explains how a well-trained child can be taught to be helpful around the house. The force of Junior's push is enough to get John all the way to the office, with John showing surprise over how much stronger his son is getting. When he returns home later that day, John finds his son has been stealing various vehicles to play with. He simply tells Ethel that their son has to learn to put his toys away.

Some time later, the narrator explains how children will, despite the parents' vigilance, take advantage of any careless moments. In this case, John and Ethel have left a gate wide open, leading to their son wandering away. When they report it to the missing persons department, the captain takes note of the height of the baby and when he asks for any discerning marks, he then has a breakdown upon seeing the giant baby passing by his window. Not long after, we see he has stolen the exterior of a Brown Derby restaurant to the shock of the patrons there and is wearing it as a hat. The police are quickly mobilized to search for the giant baby, but he seemingly disappears, leaving the police baffled.

The scene then shifts to 672, still drunk, flying through the city telling himself, "Oh brother, did I make a mess of things. The office canceled all flights till I find that giant baby", making it clear that the storks realized he'd messed things up when word got out about the incident and sent him to rectify his mistake. As luck would have it, he finds the baby sleeping in the left arm of the Statue of Liberty. He later flies up the beanstalk, hoping the giant isn't sore at him for the mistake. He finds the giant busy trying to change his miniature son and informs him that he has returned the giant baby to him, and that he is returning the normal baby to his rightful parents. At the end, the stork once again makes the mistake of delivering the normal baby to the wrong parent. This time, a kangaroo at the zoo. 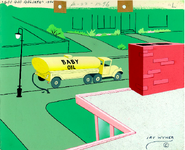