Gorilla My Dreams is a 1948 Looney Tunes short directed by Robert McKimson.

The title is a play on the expression "girl o' my dreams".

"Sweet Dreams, Sweetheart" plays as there is a trail of carrot tops floating on the seas. Bugs is stranded in a barrel in the middle of the ocean, but he doesn't seem to mind - he's reading Esquire magazine (considered an "adults only" magazine at that time) and singing the song "Down Where the Trade Winds Play".

On the island of "Bingzi-Bangzi - Land of the Ferocious Apes", the population is made up of gorillas that act like humans - they read the newspaper and read books such as "The Grapes of Wrath", have families and live in huts. (In the underscore, one of Stalling's jungle themes plays, its official title being "Dinner Music for a Pack of Hungry Cannibals"). One of the apes, Mrs. Gruesome Gorilla, is sad that she doesn't have any children - though her perpetually grouchy husband Gruesome Gorilla couldn't care less. Mrs. Gruesome walks toward the water and starts to say, "I'm going to...", but then spots Bugs floating in his barrel. Her mood instantly changes, and she takes him back to her treetop. Bugs finishes "Trade Winds" just as Mrs. Gruesome picks up the barrel, and segués into a full verse of "Someone's Rocking My Dreamboat", which he finishes just as he discovers himself in the clutches of the ape. Mrs. Gruesome wants Bugs to be her "baby". At first, Bugs doesn't want to, but when she starts crying, he gives in "That's my soft spot - dames crying." Bugs soon regrets this decision when Mrs. Gruesome takes him in as her baby "Me and my big fat mouth!".

Mrs. Gruesome then presents Bugs to Mr. Gruesome - who is none too happy about having a baby in the house. Bugs tries to fit in, playing like a "monkey". Mr. Gruesome takes Bugs out for "play" in reality, treating Bugs abusively, but Bugs soon realizes that he's in for a violent beating if he sticks around. A long chase ensues, and Bugs finds himself trapped against the edge of a cliff. Bugs gives up and allows Gruesome to catch and thrash him. However, Gruesome quickly tires out and drops from exhaustion, with Bugs knocking him over with a mere puff of breath. Emerging as the victor, Bugs jumps up and catches a hanging branch, again playing "monkey". 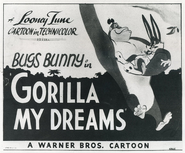 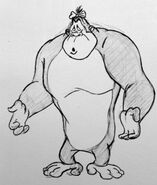 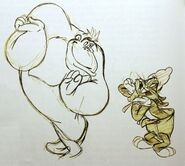