Gossamer (also called Rudolph) is a character in the Warner Bros. Looney Tunes and Merrie Melodies series of cartoons.

The character is often a hairy, red monster, although in The Looney Tunes Show, he was more of an orange tone. He has two giant tennis shoes, and his face is composed of only two oval-shaped eyes and a wide mouth. He has two hulking arms ending in dirty, clawed fingers. The monster's main trait, however, is his red hair. In fact, a gag in the 1980 short "Duck Dodgers and the Return of the 24½th Century" lampoons this by revealing that Gossamer is, in fact, composed entirely of hair.

The director Chuck Jones introduced the monster character in the 1946 short "Hair-Raising Hare". In it, Bugs Bunny is lured to the lair of Dr. Lorre, who wants to use the rabbit for his experiments. The monster serves as the scientist's henchman, trying desperately to capture Bugs. This plot was then repeated in the 1952 Jones short "Water, Water Every Hare" (here called "Rudolph").

The monster would remain dormant for many decades until Jones used the character once more in "Duck Dodgers and the Return of the 24½th Century" in 1980. This is the cartoon which canonized the character's name as "Gossamer."

He was in a 1990 episode of Tiny Toon Adventures ("Duck Treck"), and he appears briefly in the 1996 movie Space Jam. He is also featured in a number of episodes of The Sylvester & Tweety Mysteries, most notably "A Game of Cat and Monster!", where he was revealed to be a transformed Colonel Rimfire.

Gossamer's image is available on all sorts of Warners merchandise, from T-shirts to ball caps to plush toys.

A clip in the deleted scenes featurette on the Looney Tunes Back in Action DVD features Gossamer being harassed by Kate Houghton, suggesting that Gossamer was planned to make an appearance in the film, but it was deleted. However, a full look at this scene is not shown in the full deleted scenes clips on the DVD-ROM.

He starred in the series The Looney Tunes Show, voiced by Kwesi Boakye, where he is the young son of Witch Lezah. 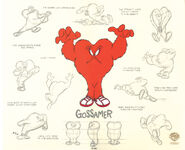 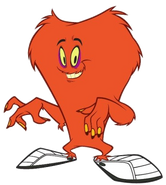 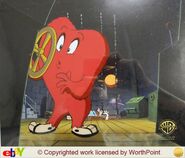 With Marvin the Martian, Witch Hazel, and Hugo the Abominable Snowman

Bugs Bunny's Busting Out All Over

With Marvin the Martian and Duck Dodgers 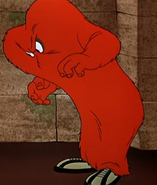 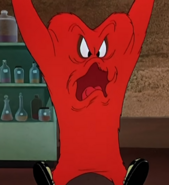 Retrieved from "https://looneytunes.fandom.com/wiki/Gossamer?oldid=276746"
Community content is available under CC-BY-SA unless otherwise noted.