Emma Webster, better known as Granny, is a recurring character and one of the few major characters who are human in the Looney Tunes and Merrie Melodies cartoons. In almost all her appearances she is the owner of Tweety, Sylvester, or Hector the Bulldog.

Granny is generally good-natured and is extremely protective of her beloved canary Tweety. Granny's over-protectiveness becomes apparent whenever Tweety is threatened (usually by Sylvester, a hungry "puddytat" who prefers eating birds over cat food). Although having the appearance of a kindly old woman, Granny has demonstrated her cleverness.

Granny has gone through several design changes. The earliest version of Granny appears in the 1937 cartoon "Little Red Walking Hood". Another version with black hair appeared in 1941's "The Cagey Canary" and another changed design is seen in 1943's "Hiss and Make Up". She received several other makeovers from 1940 to 1960, such as in "Canary Row" (1950) and "A Pizza Tweety-Pie" (1958). Granny is usually the owner of Tweety and also serves as his protector. Sylvester often finds a way to break into Granny's house for the sole purpose of finding a meal. In later cartoons, Granny appears to be the owner of both Tweety and Sylvester. Granny appears to be unmarried, or possibly a widow, since she lives by herself.

In 1995, she starred in The Sylvester & Tweety Mysteries series as a detective who investigates mysteries with Tweety, Sylvester and Hector the Bulldog. She always carries a magnifying glass around her neck for research. Later, she made appearances in Space Jam, Tweety's High-Flying Adventure (where she was once again the caretaker of the yellow canary), and Looney Tunes Back in Action.

Granny appeared in Webtoons, where she starred in a series of three shorts, Judge Granny. These shorts show another version of Granny as a Judge resolving cases of some Looney Tunes major characters.

She takes care of the Baby Looney Tunes, where she has a nephew named Floyd Minton, who started to make appearances later in the series to take the babies on trips. She also has a sister called Auntie.

She appears in Looney Tunes Back in Action as the neighbor of the hero, DJ Drake. Later, Mr. Chairman disguises himself as her.

An episode of Loonatics Unleashed contains a cameo of Granny herself, apparently still alive in the year 2772. Later, the show featured characters named Queen Grannicus (a possible descendant of Granny), the Royal Tweetums and Sylth Vester.

She makes a few appearances in New Looney Tunes in her late-1950s design.

Her design in Looney Tunes Cartoons is a fusion of her early-1950s design and late-1950s design.

She will appear in King Tweety in her early-1950s design.

She also appeared in the 1993 Sega Genesis video game Sylvester and Tweety in Cagey Capers in the first, second, third, and eighth levels as an enemy, and in the 2000 Game Boy Color video game Looney Tunes: Marvin Strikes Back!

Granny also appeared as a recurring character in The Looney Tunes Show as one of Bugs and Daffy's neighbors, voiced by June Foray. In Eligible Bachelors, it is revealed that during World War II, Granny was a WAC spy and along with Tweety, "a carrier pigeon", she stopped Nazi Colonel Frankenheimer from stealing the Eiffel Tower and various paintings from the Louvre. During the flashback, she appears as an attractive red-headed young woman in WAC uniform. In The Grand Old Duck of York, Granny teaches piano lessons too. Her students were Daffy and Winnie Yang.

Granny appeared in Space Jam A New Legacy as a member of the Tune Squad.

Granny was voiced by the late June Foray, the same person who voiced her in the original shorts from the 1950s to the 1960s. This makes Granny the only character to have the same voice actor for the original shorts and The Looney Tunes Show, as June Foray and Stan Freberg were the only two original voice-actors still alive at the time of production. 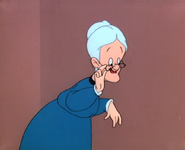 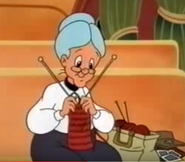 Granny and her pets in "Outback Down Under"

As a Judge in Judge Granny Webtoons

Bugs, Daffy and Emma falling down

A younger Emma being saved by Tweety in "Eligible Bachelors"

Giving a star to Winnie 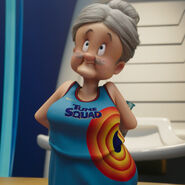 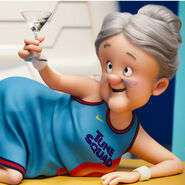 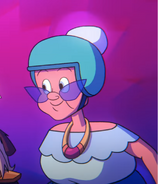