Greedy for Tweety is a 1957 Looney Tunes short directed by Friz Freleng.

Hector, Sylvester and Tweety are chasing each other on the street, and accidentally get injured by passing cars. They are taken to the Animal Hospital, where nurse Granny takes care of them. Only Tweety tries to get some rest, while Sylvester tries to get him like usual, and Hector harasses Sylvester by barking at him. Hector hits Sylvester's cast with a mallet after being told by the cat to shut up for the second time, and Granny sees him in pain, so she relocates him to another bed opposite Hector in the same ward and gives him pills to make him fall asleep, only for Hector to bother him again. Sylvester succeeds into eating Tweety, but Granny sees Tweety's feathers on Sylvester, and when she sees Tweety in an X-ray, she takes Sylvester in for surgery to get Tweety out. Sylvester appears to be out of surgery, with a giant bandage over his chest.

Hector tries to hit Sylvester's cast again with a club, but Sylvester slides his cast into a mouse hole only for the mouse to hit both Sylvester's and Hector's casts with a hammer, and when Granny saw the two in pain, she straps them in their beds. Sylvester build a machine that puts dynamite in Hector's cast, but Hector rows to Sylvester's bed and switched the dynamite cast in Sylvester's leg, which it explodes. Later, Granny tells them that there is nothing wrong with them, and they are released.

As soon as the trio are discharged from the animal hospital, Sylvester resumes chasing Tweety, and Hector goes after Sylvester again, once again leading the chase to the streets. Granny, as she checks "Tweety", "Cat", and "Dog" into the "Outgoing Patients" list, she sees the chase, and knowing that they'll get injured by passing cars again, puts them back into "Incoming Patients", and sighs, "Que sera sera." 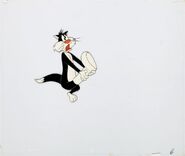