At a local theater, a list of attractions is being shown. The main attraction is Four Daughters, with selected shorts. An orchestra starts to play as the show begins, and the dog hosting the show pops out. He is going to tell the audience what they can be expecting, but is interrupted by Egghead singing, "She'll be coming 'round the mountain when she comes". Egghead is yanked from the stage by a hook, and the host continues, but Egghead returns singing the same song. This time he is yanked back again by two hooks.

The next act is named, "Maestro Padawisky", a so-called talented piano player, but actually he puts a nickel into a coin slot and the piano plays for him. This doesn't impress the judge and he's sent down and out through a trap door in the stage, with the piano crashing on him off-screen.

A dog in the audience hopes to relax as he inserts his feet between the cushion and bottom edge of the seat in front of him, but he's interrupted by a hippopotamus that sits down in that same seat, crushing the dog's feet. The dog walks off, weeping in sorrow for his now-bent feet.

The next act is a bird that can sing himself up to the sky, so much that he nearly reaches the top of the theater before he is distracted when the judge rings the bell, sending him falling through the trap door into the basement.

In the audience a dog is interrupted by the hippopotamus's raucous laughter, and he eventually walks off, after the hippopotamus accidentally pounds his head into his body.

The host announces the next act, "The Hindu Mystic, Swami River". An Arabian-looking guy comes out and asks for a subject from the audience. He spots Egghead and thinks he sees a perfect stool pigeon. Egghead goes onto the stage, and is told to go inside a basket, where the man sticks a sword right through it. He asks Egghead to get up, but gets no response, and opens it to find a not-so-positive response. He asks an usher to deliver the man's money back, thus ending his act.

The next act is dubbed "the world's smallest entertainer", Teeny, Tiny, Tinsy, Tinny-Tinny-Tin. A girl flea then hops on the stage and recites "Mary Had a Little Lamb" in a very high-pitched squeaky voice and laughs when she finishes the poem, but is rejected.

The next act is called, "Fleabag MacBoodle and his trained dog act". The owner, a walrus, asks his Jack Russell terrier to roll over, play dead, sit up, and speak. The dog actually does speak, but he is rejected and sent down to the basement.

Back in the audience, the same hippopotamus that caused the two previous people to leave, underestimates his strength and his laughter and ends up knocking five people beside him through a wall right out of the theater.

Other acts that play include a fox reciting Shakespeare, which ends with the fox getting tomatoes thrown in his face, and then rejected, and the balcony scene from Romeo and Juliet done by a rooster (Romeo) and a hen (Juliet), but it's interrupted by the hippopotamus's laughter, and so Romeo decides to shut the hippopotamus up. The balcony scene continues until Romeo discovers that Juliet has the same annoying laugh as the hippopotamus. The curtain closes up and Romeo shuts Juliet up behind the curtain.

As the host is going to announce who won the cup, he is interrupted by Egghead once again. He is yanked back again, this time by three hooks, plus a fourth hook that snares his hat when it gets left behind. The announcer is surprised to learn that the audience loves Egghead, until he sees that everyone in the crowd looks exactly like Egghead as they applaud raucously.

(1989) VHS
Casper the Ghost and Other Cartoon Classics

(2018) DVD
The Wackiest Cartoons of All Time! Volume 1
Add a photo to this gallery 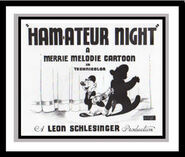 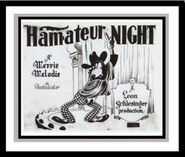 Retrieved from "https://looneytunes.fandom.com/wiki/Hamateur_Night?oldid=278766"
Community content is available under CC-BY-SA unless otherwise noted.