Hamton J. Pig is a fictional anthropomorphic pig from the 1990s animated series Tiny Toon Adventures. Hamton was voiced by Don Messick, later by Billy West, after Messick's retirement and eventual death in 1996 and 1997 respectively.

Hamton's role in the series is as a straight man, with his personality dominated by tendencies toward being bookish and obsessively neat. When Hamton's patience is pushed too far, however, he is known for angry fits that surprise the source of his frustration. Some of his madness-inducing moments involves such incidents as being unable to open a new school-issued locker, or failing in an attempt to cook a lobster. Hamton's best friend, Plucky Duck, often attempts to take advantage of Hamton's easy-going nature, with Plucky often using him as his sidekick in his various scatterbrained schemes. Like the other characters in the series, Hamton attends ACME Looniversity, where his mentor and favorite teacher is Porky Pig. Other friends of Hamton include Babs Bunny, Buster Bunny, and Fifi La Fume (the latter of whom eventually becomes his love interest). Although Hamton's non-aggressive personality bears similarities to Porky's, Hamton also bears similarities to Piggy Hamhock, a Friz Freleng-created character featured in the Looney Tunes/Merrie Melodies shorts "Pigs Is Pigs" (1937) and "At Your Service Madame" (1936).

Hamton is one of the few characters whose family appeared on the show. His family consisted of his parents, Winnie and Wade Pig. Hamton's parents figured prominently in the Tiny Toon Adventures direct-to-video movie How I Spent My Vacation (along with Hamton's uncle Stinky Pig, a heavy-set pig with poor personal hygiene); in this film, they take Hamton and Plucky on an ill-fated vacation to a theme park (during which Hamton barfed on a valuable comic book of Plucky's). Hamton's parents also appeared in another episode involving a house party Plucky goaded Hamton into throwing while his parents were out of town. Jonathan Winters voiced Wade (he had previously voiced Slap-Happy Stanley in an earlier episode), while Edie McClurg voiced Winnie. A menorah-like candelabra is seen in the Pig family window during the series' Christmas special, implying that the family is Jewish. However, they do not keep kosher, as Hamton once tried to cook a lobster, and indeed, aren't even kosher themselves, being pork (it's fairly likely this is meant to be a joke). The voice actor for Hamton, Don Messick, passed away in 1997 due to a stroke; Hamton was Messick's last major role. In the Sony PlayStation video game Toonenstien: Dare to Scare, Hamton was voiced by Bob Bergen. 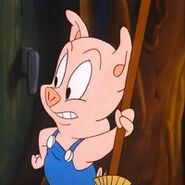