Coyote chases a beeping cloud of dust along a desert highway, but it's not Road Runner, it's Bugs Bunny, who explains that he's standing in for Road Runner because he "sprained a giblet cornering a sharp curve the other day." Bugs really can't run this fast, so he takes ACME Super Speed Vitamins to gain supersonic speed abilities like Road Runner's. As long as he doesn't run out of pills, he'll be all right.

When the pills do run out, Bugs is forced to use wits to outwit the Coyote. Bugs stops again and holds up a sign saying "HOLD IT". Bugs draws a line in the road, and then a second. As Wile steps in beyond the first line, the bottom falls out from under that segment into an underground river, and Bugs runs off.

1. Wile E. tries to capture Bugs using a carrot, but ends up catching a giant fish out of nowhere, who swallows all of Wile E. except for his feet. Wile E. walks away, still held onto by the fish.

2. Later, Bugs looks on in disbelief as Wile E's attempts to use a rifle to cut a rope holding a rock over a catapult to propel himself over a large gap backfires, sending Wile straight into the rock, with the rifle, having fallen out of Wile's hands, coming back to hit him to shoot Wile straight up vertically.

3. Bugs is running again. Wile E. attempts to shoot Bugs as he passes by. Unknown to Wile E., Bugs had hastily attached a maze of pipes to the rifle. When the firing sound is muted and Bugs runs around the mountain, Wile E. Coyote checks out the maze, only for the bullet he fired to exit when he finishes and hit him.

4. Wile E. tries to stop Bugs by placing a carrot on a trap. Wile E. drops the anvil upon sight of Bugs, but Bugs places the target on him. Upon hitting Wile E., the edge of the cliff on which Wile E. was standing dislodges and falls to the ground below, and then the anvil is dropped as the target is pulled. The anvil misses Wile E. Coyote, but he is run over by a passing truck.

5. Wile E. tries to be a "Coyote cannonball" to speed past Bugs, only to point the cannon downward via his weight, and launch himself into the ground.

6. As Bugs times Wile E.'s arrival again, Bugs is able to place a large patch of glue in the road. Wile E., unable to stop in time, ends up stuck in the puddle and tries to reach a ringing phone some distance away. Bugs answers the phone, which he hands off to Wile E. Coyote, who ends up springing back, phone in hand, the other way, taking the chunk of road out of its bed with him, going through a door near a cliff, causing Bugs to say, "Did you realize that he almost hit this door?", and end up crashing into the side of another cliff behind him, and falling halfway down. Only the telephone cord prevents him from falling all the way to the ground, but Bugs rings up Wile E. and, mimicking the phone company, remarks, "You haven't paid your bill yet, so we're going to have to cut you off". Bugs severs the cord and Wile E. becomes a victim to gravity as usual. Bugs says, "The moral is, never get cut off in the middle of a long-distance fall!"

CBS airings excised part of the scene when Wile E. Coyote fires a rifle at Bugs Bunny, who is substituting for the Road Runner. The gun sound is muted; so, Wile E. investigates and follows a protracted section of metal pipe attached to the rifle, until he reaches the end of the pipe, at which point the bullet that he fired shoots him in the face. Also edited out of this cartoon was another gun blast striking Wile E's backside after Wile E. is catapulted against a big rock that he had hung on a rope and over a teeter-totter.[1] 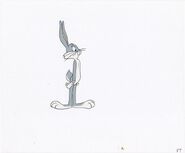 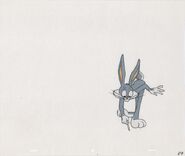 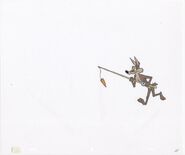 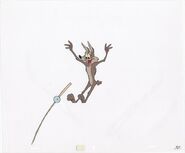