Charles M. Wolf is relaxing in his easy chair, watching a baseball game on television. Suddenly his wife scolds him for being lazy and send him out with his rifle to shoot a rabbit for supper. Bugs sees him running with the gun so he starts asking him questions. The wolf can't remember where he's going until Bugs suggests hunting, then he can't remember what he is hunting. He starts going through a list of animals in his head. "Squirrel? Possum? Chipmunk?" When Bugs asks if he's hunting rabbit, the wolf suddenly remembers and fires at him. Bugs easily evades three shots and insults the wolf's prowess. Bugs inspects the gun for him, to see if there's anything wrong with it, and shoots the wolf in the face.

Charles chases Bugs around a tree. Bugs stops but the wolf keeps running around and around. Bugs asks him what he's chasing, but he can't remember. "Woodchuck? Porcupine?" When Bugs suggests rabbit, Charles makes a run at him, but Bugs trips the wolf and hops down a nearby hole. Bugs hands up a box and Charles finds a grenade inside. He plans to blow up Bugs with it, but takes too long reading the instructions and blows himself up instead.

When the smoke clears, Charles chases Bugs into a train tunnel. He reverses direction when he sees a light and hears a whistle. Once outside in the sunlight, he sees it's just Bugs with a flashlight, so the chase resumes. When he sees another light and hears another whistle, he stands his ground, but this time it's a real train that hits him, and he wonders aloud "Now why was I tryin' to catch a train?"

Back at the rabbit hole, Bugs lights an extremely long fuse. It eventually burns past Charles, who curiously follows the spark as it burns over a log, behind a hill, and into a barrel of TNT, which of course explodes in his face.

Bugs extends a plank over a canyon and erects a door near the end of it. Looking for the rabbit, Charles runs and busts the door off its hinges, then he and it fall to the canyon floor, and the impact almost makes Bugs fall off the plank, but he is able to hoist himself back up. Charles races furiously back to the top where Bugs scolds him for breathing on his fur. Bugs asks what he wants anyway. Charles runs through the list again. "Chipmunk? Squirrel? Possum?" Long after the sun has set, he is still pondering "Zebra? Orangutan? Hippopotamus?" Bugs, wearing a nightshirt and nightcap, retreats down his hole saying, "Well, good night, folks. We're running out of time."

Much like "Hare Trimmed", the version of this cartoon shown on ABC's The Bugs Bunny & Tweety Show was riddled with edits for cartoon violence that the censors found too extreme. The following scenes were affected:

Charles M. Wolf: I hate her! 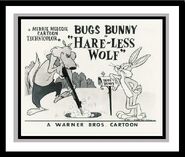 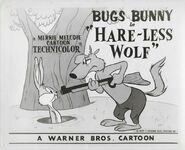