The title is a pun on Arabian Nights.

A band called Timbuk Two Plus 3 plays "Sweet Georgia Brown" to entertain the sultan in his palace. The performance ends when the unimpressed sultan opens a trapdoor in the floor beneath the band, sending them into a crocodile pit below. The next musician, scared by what happened to the others, performs an Elvis-inspired "Hound Camel,” before meeting the same fate.

Meanwhile, Bugs, intending to travel to Perth Amboy but having missed a left turn at Des Moines, emerges from his tunnel in front of other prospective performers and is ordered to entertain the sultan.

Assigned the role of "Teller of Tales,” Bugs tells how he arrived in the palace. Bugs recounts his problems with the bull he met at a bullfighting ring while trying to find Coachella Valley, and his outsmarting the bull with a hidden anvil. The sultan is prepared to press the button to send Bugs into the pit, but then Bugs recounts his experiences with Rudolph the monster, when Bugs impersonated a hairdresser to outsmart Rudolph. Bugs also describes his encounter in the Sahara Desert with Sam, "the stupidest character of them all,” and Sam's unsuccessful attempts to enter a desert fort.

While Bugs is chuckling at Yosemite Sam's misfortunes, the sultan turns out to be Yosemite Sam himself; Sam presses the button to drop Bugs, but Bugs has shut off the mechanism with the master switch. When Sam tries to find out what is wrong, Bugs turns it back on, dropping Sam into the crocodile pit. Sam escapes, but so does one of the crocodiles, chasing Sam off. Bugs, now with turbans covering each ear, describes Sam's act as a "don't call us, we'll call you" act, along with some other remarks.

Opening color rings for this short

Another concept drawing by Mike Maltese 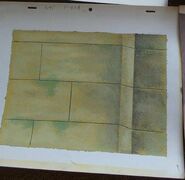