Millionaire Elmer Fudd enters the boardroom of his multi-million-dollar company, but he isn't himself. He is hopping around on all fours and acting like a rabbit. Fudd snaps into a moment of paranoid delusion, expressing worry and fright over hunters who are out to get him. The board of directors agrees that Fudd needs help.

Soon, Elmer, now wearing a rabbit suit, is committed to the Fruit Cake Sanitarium ("It's Full of Nuts") for treatment of his apparent mental illness. A few moments later, Elmer sees Bugs Bunny walk by and lures him to the window with a carrot. Bugs naively says, "You mean I can have that carrot if I just open the window?" Bugs goes inside, takes the bribe, and Elmer hops out the window. Bugs lies in Elmer's bed to "keep it warm for him." Bugs then notices the medicine beside him and reads the instructions, "take one teaspoon every hour, with water," but he misinterprets the instructions and ingests the spoon instead!

The Austrian hospital psychiatrist whose name is Dr. Oro Myicin comes for Elmer, but notices Bugs in his place; Myicin, having already diagnosed Elmer with "a clear case of rabbitschenia", declares the apparent transformation of Elmer into Bugs as the "vurst case I've evah zeen!" When Myicin tries to convince Bugs he is Elmer Fudd, Bugs at first believes Myicin is identifying himself as Fudd, and politely shakes hands saying "Pleased to meet you, Mr. Fudd!" Myicin then says "No, I em naut Elmer J. Fudd, you ah Elmer J. Fudd!" Realizing the doctor's intent, Bugs presumes it is Myicin who is insane. Bugs momentary holds up a card with a screw and ball, then attempts to psychoanalyze the doctor instead. Irked, Myicin gives Bugs a hypnotizing "kapzule." Once it takes effect, Bugs is made to repeat, over and over, "I am Elmer J. Fudd, millionaire. I own a mansion and a yacht," gradually acquiring Elmer's speech pattern.

Myicin's programming works: Bugs Bunny leaves the sanitarium convinced he's Elmer Fudd and adopts his speech impediment, pronouncing R's and L's as W's. Myicin telephones Elmer's chauffeur ordering him not to be put off by the rabbit appearance and to get Elmer back into the lifestyle he knew before the delusion. The chauffeur tells Bugs that since it is Wednesday, he brought the hunting clothes. Bugs decides to relax by going hunting, where Elmer, still in his rabbit suit, is waiting.

Elmer sics a bear on Bugs and telling him to play dead; the bear, concludes from Bugs' body odor that he is indeed dead and buries Bugs, who then falls from the underside of a cliff ledge.

Bugs is about to capture Elmer ("No wabbit's gonna outsmawt Emmuh J. Fudd!") when a government agent taps Bugs on the shoulder, asking, "Pardon me, did you say you were Elmer J. Fudd?" Bugs replies with the phrase that turned him into Elmer. "Yes, I am Emmuh J. Fudd, miwwionaiwe. I own a mansion and a yacht." Bugs is then arrested for Elmer's non-payment of $300,000 in back taxes, and tries in vain to explain himself, protesting, "I'm hunting a scwewy wabbit!" Elmer says "I may be a scwewy wabbit, but I'm not going to Alcatwaz!" as he jauntily does the bunny hop into the distance.

The following scenes were edited when this cartoon was shown on ABC's The Bugs Bunny and Tweety Show: 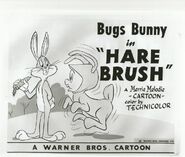 "I am Elmer J. Fudd, millionaire. I own a mansion and a yacht."

"I may be a scwewy wabbit, but I'm not going to Alcatwaz!"