The title is a double pun on "hair ribbon", with "hare" referring to Bugs and "ribbin'" meaning "teasing".

A dog with a Russian accent is hunting for a rabbit by sniffing a trail. He happens upon Bugs, who begins to torment the dog. This prompts a chase, which leads to a nearby lake.

Eventually, the dog corners Bugs and demands he give him a rabbit sandwich. Bugs obliges, and the rabbit places himself between two giant slices of loaf bread, with his legs curled next to his body. The dog takes a bite, and Bugs screams and fakes his death. The dog becomes instantly grief-stricken and sobs, declaring that he should be the one to die. With this statement, Bugs springs back to life asking, "Ehhhh...do you mean it?", and obliges the dog's death wish. The dog falls to the ground, Bugs plants a flower on his chest and dances away into the distance. As the cartoon is about to "iris out" the dog sits up, holds the iris before it closes, and declares "This shouldn't even happen to a dog!" He then lets the iris go, but it closes on his snout, making him yelp in pain.

(1991) LaserDisc
The Golden Age of Looney Tunes, Vol. 1,Side 7, Bugs Bunny By Each Director

(1991) VHS
The Golden Age of Looney Tunes Vol. 7: Bugs Bunny By Each Director

The two alternate endings to Hare Ribbin', general release (left), "director's cut" (right). Each depicts the dog's death via gun violence, which is today considered too harsh for its target audience.

This scene of Bugs telling the audience that he simply tucked himself in far from the position of the dog's mouth is absent in the "director's cut" version. 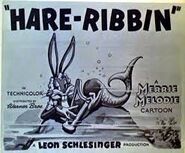 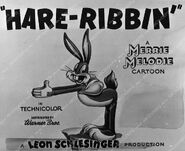