The title is a play on "hair tonic", a type of patent medicine, reinforced by Bugs' portrayal of a fake doctor at one point in the picture. A bottle of "hare tonic" would appear as a prop in a 1946 short, "The Big Snooze". It would also appear in the 1949 short "Bye, Bye Bluebeard".

Elmer Fudd has purchased Bugs Bunny at a local grocery store with a sign visible in the window offering a special on "Fresh Hare" and is taking him home to make a meal. As he bounces along, he sings the tune of "Shortnin' Bread", substituting "Rabbit Stew". Bugs pops out of Elmer's basket, munching on a carrot that was in there with him, and asks, "Eh, whatcha got in the basket, doc?" Elmer replies, "I got me a wabbit! I'm gonna cook me a wabbit stew!" Bugs states his "love" of rabbit stew and then begs to see Elmer's rabbit. Elmer opens his basket and finds it empty. Bugs pushes his nemesis into his own basket and then sings the tune Elmer had been singing, but Elmer realizes he's been tricked, and re-reverses the switch. Foreshadowing pranks to come, Bugs says from inside the basket, "He don't know me vewy well, do he?"

Once at home, Bugs easily secures his escape by distracting Elmer, tricking him into thinking the phone has rung. However, just as he's about to leave, he decides he'd rather stay and heckle his would-be devourer. Bugs effects a radio broadcast that warns of the dread disease "rabbititis", which is contracted from rabbits "sold within the last three days" and which causes people to see spots and have "delusions assuming the characteristics of rabbits", among other dubious symptoms. This worries the gullible Elmer, so he informs Bugs that he is free to leave. Bugs, however, points out a sign on the door that states that the house is "QUARANTINED DUE TO RABBITITIS" and that no one can enter or leave.

Thus Bugs stays to torment Elmer, and many hijinks ensue, including Bugs posing as Elmer's shower faucets {"Gurgle, gurgle. Why don't ya' pay ya' water bill, Doc?"} and a doctor ("Dr. Killpatient", parodying Dr. Kildare), and pretending to be Elmer's reflection in the mirror (a scene inspired by the famous mirror scene in the Marx Brothers' film, Duck Soup). Finally, Elmer sees Bugs' game and chases him out of the house with a shotgun. But Bugs quickly halts the chase and, in an unusually lengthy breaking of the fourth wall, even by Bugs' standards, he convinces Elmer that members of the audience, the people who are watching the cartoon, are now afflicted with rabbititus (as in they're getting fuzzy, having long ears and a white, fluffy tail), which causes Elmer to flee back into his house in terror.

Then Bugs tells the audience that it was "all just a gag" and that they don't have rabbititus. He then says if they do have rabbititus, then red and yellow spots will appear, swirling. Bugs then says, "Then, suddenly, everything would go black!", as everything goes black. 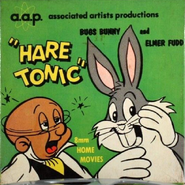 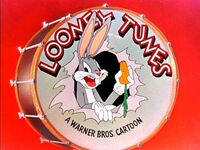 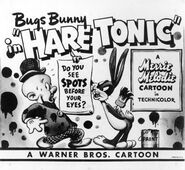 Bugs as "Dr. Killpatient", about to confuse Elmer again