The title is a play on "daredevil."

Bugs Bunny is tricked into being the first rabbit to go to the moon. When he lands on the moon he finds Marvin the Martian about to blow up the Earth with his Uranium PU36 Explosive Space Modulator. Bugs deals with the Martian. However, Marvin calls in the reserves, which proves to be a green Martian dog called K-9. Bugs outwits both K-9 and Marvin by stealing the modulator. He gives it back, intending to blow up Marvin, but blows up the moon instead, leaving Bugs, Marvin and K-9 stranded on the moon's remains in the middle of outer space. 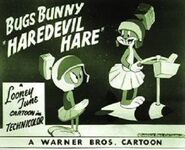