Hatta Mari is a female white pigeon who works for the Nazis as a femme fatale. She only appears in the cartoon "Plane Daffy". Her name is a reference to Mata Hari. She was voiced by Sara Berner.

After a 47 year-long absence, Hatta Mari would appear again in the Tiny Toon Adventures episode "New Character Day" (in a segment called "The Return of Pluck Twacy") where she appears in Plucky Duck's dream sequence. In the dream, she is depicted as being the physical incarnation of Shirley the Loon's runaway spiritual Aura which has gone rogue and joined a band of criminals. In order to find her and thus reform her lost half, Shirley hires Pluck Twacy to bring back Hatta Mari, but this proves more difficult than anticipated as Hatta has now joined up with the most vicious rogues in town, which include the rogues' galleries of both Pluck Twacy and Duck Twacy, such as Tickle Puss, Boxcars, Pumpkinhead, Hammerhead, Neon Noodle and many more. Hatta herself attempts numerous times to murder Pluck Twacy alongside the other crooks but in the end Pluck is unable to capture her or defeat all the crooks as he wakes up before he can achieve his goal. Notably, Shirley's Aura had appeared in prior episodes outside of Plucky's dream but she always resembled a transparent pink version of Shirley rather than Hatta Mari. 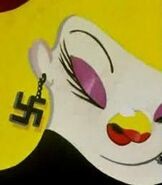 Give me that secret!