Hector the Bulldog is a bulldog, usually the pet of Granny. Normally he clobbers Sylvester so he won't eat Tweety. He is muscle-bound and has grey fur (except for "A Street Cat Named Sylvester" and "Greedy for Tweety" where his fur is yellow-ish).

His first prototype appearance was in "Double Chaser".

Hector's possible debut appearance in the 1945 short "Peck Up Your Troubles" paired with Sylvester and a woodpecker. His second appearance was in "A Hare Grows in Manhattan". After that, Hector was a minor player in many Sylvester & Tweety cartoons, including 1954's "Satan's Waitin'".

Outside the Tweety cartoons, Hector is usually also Sylvester's arch-enemy (such as in "Little Red Rodent Hood", "A Kiddies Kitty", "Pappy's Puppy"). In one cartoon in particular, "Stooge for a Mouse", both Sylvester and Hector (known as "Mike") start off as friends, but turn into sworn enemies thanks to a mouse Sylvester had chased earlier.

He also has a role in the series The Sylvester & Tweety Mysteries, where Sylvester is constantly outwitting him. He also made a cameo appearance in Tweety's High-Flying Adventure, and appears in the webtoons, "Full Metal Racket!" and "Fast Feud".

A dog called Butch, with a very similar appearance to Hector, appears in "Birdy and the Beast" (1944), predating "Peck Up Your Troubles". Butch may be regarded as a prototype Hector. Jerry Beck says in the book Looney Tunes: The Ultimate Visual Guide that in "Pappy's Puppy", Butch J Bulldog is meant to be the same bulldog as Hector from the Tweety and Sylvester cartoons which Friz Freleng also directed at the same time.[1] 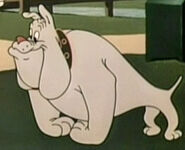 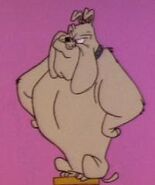 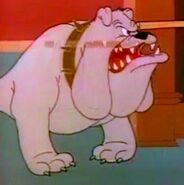 Hector's debut appearance in "Peck Up Your Troubles" 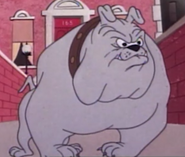 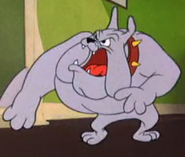