Henery is a tiny, brown chicken hawk with a forelock of feathers.

Henery is very small, even compared to other chicken hawks; his father is several times taller than Henery. From his size and eternal confusion as to what a chicken actually looks like, it can be assumed that he is meant to be very young, despite his boisterous gangster-style voice and attitude. His voice, supplied by Mel Blanc and Joe Alaskey, is a lot like that of Tweety, minus the speech impediment.

Henery's personality is that of a blustery loudmouth with an oddball accent, which makes him a somewhat odd foil for Foghorn. (Many of the more "classic" protagonist/antagonist pairs feature characters that have opposing personalities, if not diametrically opposite ones.)

In the typical Henery/Foghorn cartoon, Henery has struck out on his own for the first time, eager to capture (and presumably consume) a chicken. Having led a rather sheltered life, however, he doesn't know what a chicken looks like, only that chicken hawks eat them. Foghorn presumes that this diminutive, naïve troublemaker is no real threat to anyone; however, seeing the potential for annoyance, he points Henery in the direction of The Barnyard Dog. The remainder of the cartoon is usually consumed by the Dog and Leghorn alternately assuring Henery that the other is a chicken and encouraging him to attack mercilessly. There was one cartoon, however, in which Foghorn tried to convince Henery that he was a chicken, over Henery's belief that Foghorn was merely a "loudmouthed schnook."

Many cartoons ended with Henery capturing one (or both!) of his tormentors, pragmatically shrugging his shoulders over whether his prey may or may not be an actual fowl. Typically, he would decide that one of them had to be a real chicken and would therefore knock them both out and take each. This also demonstrates that Foghorn had erroneously looked over the very real threat Henery presented because he could not see past his appearance. Unlike most Looney Tunes animal antagonists where they often fail to catch their prey (such as Wile E. Coyote and Sylvester), Henery often succeeds in capturing his prey (mostly in the form of Foghorn Leghorn). 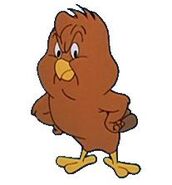 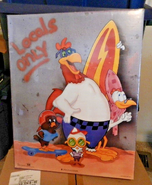 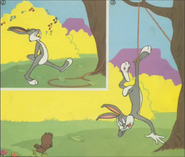 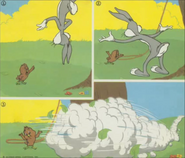 Retrieved from "https://looneytunes.fandom.com/wiki/Henery_Hawk?oldid=199591"
Community content is available under CC-BY-SA unless otherwise noted.