After having several of their hunting attempts foiled, hillbilly brothers Curt and Punkin'head Martin are determined to get revenge on Bugs Bunny for their humiliation. But Bugs easily outsmarts them and eventually leads them into a violent square dance involving repeated slapstick comedy gags.

This cartoon saw major editing when aired on ABC due to violent content. The following scenes were edited:

Part of the animator draft along with two other drafts for "French Rarebit" and "What's Up Doc?" 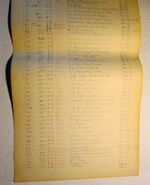