The title is a pun on "Hip Hip Hooray!"

The words to the title appear one at a time in rapid-fire fashion, punctuated by their own zoom. Road Runner zooms into view, labeled Digoutis-unbelievablii, and then moves away to escape Wile E. Coyote, labeled Eatius slobbius. Eventually, the chase leads to a three-way fork, leaving Wile E. confused as to which way his prey went. Road Runner answers for him by pulling up behind him and beeping, giving the coyote a real headache on the rocks above. However, before he can chase Road Runner in that direction, the bird pulls behind him a second time. Wile E. instantly suspects the situation, and peeks through his legs, but this only leads to him bumping his head on the ground when Road Runner beeps. The chase now begins in full force, ending when Road Runner barely escapes the coyote's grip and causes the road to bend out a bit, sets a bridge on fire and causes a large row of telephone polls to be pulled and stacked together due to his speed. Wile E. does his best to slow down when he sees the upcoming gap left in it, but fails and falls through the gap. At the bottom of the gorge, he is pondering his next move.

1. While Road Runner is munching on desert plants with berries, his opponent attempts to drop a hand grenade on him. However, the grenade, drops onto a power line and is hoisted directly back to its owner, instantly wiping the laugh off his face. The grenade explodes, and the coyote lets go of the stop perforce. This, however, causes a second grenade to be thrown up to Wile E. and explode on him as well.

2. The coyote starts his painful trapeze act and ends up getting scraped on the ground, hitting the top of a tunnel and hit in the face by an ACME truck.

3. Hoping to ambush Road Runner, the coyote loads a firework into a slingshot and prepares to fire it at the Road Runner, but it explodes on him first.

4. Having mined the road with a giant firework, Wile E. has logistical problems with the match. His first attempts has the match burn his face Finally he is "gratefully" helped out by Road Runner, who gives the coyote a lit match. As soon as Wile E. lights the fuse, Road Runner runs off, causing the angry coyote to chase after him. Road Runner stops next to the firework, signals for the coyote to stop, and points at the sizzling firework before he dodges the explosion, leaving Wile E. to take the blast.

5. To hopefully squash Road Runner, Wile E. flips a rock across a high outcropping, leading to the entire outcropping breaking off. Wile E. continues to flip the rock over, and it is only when the rock ends up in the air above him that he realizes what is happening. He runs through the air to avoid being squashed directly by the rock, and the piece of outcropping lands on a rock to create a lever. Wile E. lands on the right end, while the rock smashes onto the left end and sends Wile E. up into a rock-face, then down onto the see-saw again before he flips the rock onto himself.

6. With his own special steamboat, it looks good for Wile E. Coyote, tearing apart the river as he attempts to catch Road Runner on the riverbank. However, when he climbs out to attempt to grab the bird, he sees that he is going over a waterfall and only barely steers himself back in the other direction. With relief, Wile E. relaxes until he ends up falling off a second waterfall in the opposite direction.

7. With stealth exhausted, Wile E. tries to use raw speed to catch Road Runner and tests his new high-speed tonic (containing "Vitamins R, P, & M", no less!) on an unsuspecting mouse. The mouse rattles around as a "warm-up", then darts across the desert at an impossible speed, and runs up and down a rock arch to return to his tester. Happy with this development, the coyote kisses and releases the mouse, still suffering the effects of RPM, into his hole, and then drinks the entire bottle of it himself. After the warm-up period, Wile E. begins the chase and quickly begins to erase Road Runner's considerable head start. However, just as it is getting down to the wire, Road Runner sidesteps and trips the coyote, making him roll out of control into a construction zone and then into a dynamite shed, along with a kerosene lamp, which explodes everything inside. The small silo top is transformed into a rocket, which is fired into the sky along with its rider and explodes, creating fireworks in the starry night sky, much to Road Runner's amusement as he watches the whole thing as the words "THE END" flash along the fireworks. 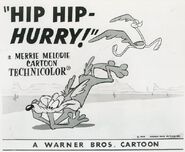 Another concept drawing by Mike Maltese