This article is about the character. For the short, see Hippety Hopper (short).

Hippety Hopper is an animated cartoon character in the Warner Bros. Looney Tunes series of cartoons.

Robert McKimson introduced Hippety Hopper in "Hop, Look and Listen" (1948), which created the mold into which future Hippety Hopper cartoons would fall: baby kangaroo Hopper escapes from the zoo, the circus, etc., and is mistaken for a giant mouse by Sylvester the cat. Sylvester then tries to capture and eat his "prey", but the innocent and infantile Hippety mistakes Sylvester's predations for a game — a game of rough-housing, to be exact. Sylvester is repeatedly punched, kicked, juggled, spun, and pounced, but each failure only cements his will to have the "mouse" for lunch. The cat's dignity will suffer no less.

After "Hippety Hopper" (1949), the first cartoon where the character is officially named, the character would later return in McKimson's "Pop 'Im Pop!" (1950) in which proud papa Sylvester boasts of his mousing skills to his son, Sylvester Junior. Also in 1950, Hippety made a cameo in the Bugs Bunny cartoon "Bushy Hare", which is the only time he talks.

In "Cats A-weigh!", (1953) Sylvester accepts a position as mouse-catcher on a ship. He encounters Hippety Hopper being shipped from Australia. Sylvester mistakes Hippety Hopper once again for a giant mouse, and the baby kangaroo promptly beats the cat to a pulp. Junior is mortified, but the true victim is Sylvester, humiliated by a mere "mouse" in front of his own son.

McKimson would continue the Sylvester/Hippety Hopper series for 16 years, varying it slightly from cartoon to cartoon. In "Bell Hoppy" (1954), for example, Sylvester must hang a bell around a mouse's neck in order to join the "Loyal Order of Alley Cats and Mousing and Chowder Club."

In "Lighthouse Mouse", Sylvester must guard a lighthouse from the baby kangaroo who wants nothing more than to turn it off. "Hoppy Go Lucky" (1952) was a parody of Of Mice and Men, with Sylvester accompanied by the giant, simple-minded cat named "Benny" who wants a mouse to "hug and pet." The central theme is always the same: Sylvester is shamed for his failure to capture a simple "mouse".

The Hippety Hopper/Sylvester cartoons ended in 1964 when the Warner Bros. studio closed its animation unit, with "Freudy Cat" as Hippety's final appearance. The character continues to appear in Looney Tunes marketing and other projects, such as some cameo appearances in the crowd shots of the 1996 film Space Jam and the very end of the 2003 movie, Looney Tunes Back in Action. In an episode of The Sylvester & Tweety Mysteries set in Australia, Sylvester stumbles into a group of baby kangaroos, who all resemble Hippety, and comments that this is the first time he had seen the "giant mice" for years. Originally Hippety Hopper intended to appear as a cameo in the film Who Framed Roger Rabbit in the deleted scene "Acme's Funeral". [1] 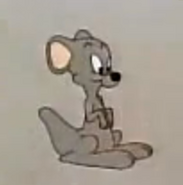