When this cartoon aired as part of FOX's Merrie Melodies Starring Bugs Bunny & Friends compilation show, the entire opening sequence where the mouse is at the docks contemplating suicide in order to get away from Sylvester, only for Hippety Hopper to save him was cut, making the cartoon start on the scene of the mouse rescuing Hippety Hopper from his crate. Surprisingly, this wasn't edited from other channels that have a history of editing out spoken and visual references to suicide, such as CBS, ABC (though ABC did eventually drop this short in 1994), Nickelodeon, Cartoon Network, and Boomerang[1], nor were other dubious parts cut, like the homeless man hitting another homeless man after Hippety Hopper jumps on the first man's head or the mouse and Hippety Hopper scaring the college coeds at the Eta Bita Pi sorority house. 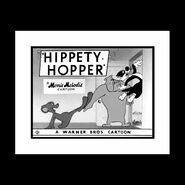