His Bitter Half is a 1950 Merrie Melodies short directed by I. Freleng.

Daffy Duck marries, but only for money. He soon attempts to leave when he discovers what his new family is actually like, a pushy, abusive, domineering duck wife and her bratty, troublemaker son Wentworth. 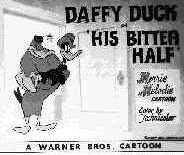 Screenshot of the 2021 restoration from MeTV