Holiday for Drumsticks is a 1949 Merrie Melodies short directed by Arthur Davis.

In a montage, the turkey exercises day by day, while Daffy eats up the entire feast that was supposed to be for the turkey. On Thanksgiving Day, the turkey is now extremely slim, while Daffy is fat. Pa finds the turkey and states that it's too bony for him to eat. However, the tables turn when Daffy brags that he is a healthy duck himself and that the hillbillies can't eat duck for Thanksgiving. Pa finds Daffy a suitable alternative and attempts to axe and shoot him. Daffy frantically tries to lose his weight, but he nearly gets shot in all attempts. Daffy begs the turkey to save him, and the turkey hides him in various areas, before admitting that Daffy can't be saved aside from moving to a country that doesn't celebrate Thanksgiving. The turkey tells Daffy to take an airplane to Rio de Janeiro, which is a trick to get Daffy into the oven. However, the hillbillies are unable to cook Daffy, as Daffy keeps blowing the matches out. 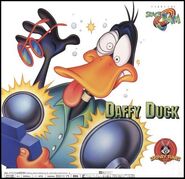 Original closing title (from a 16mm black and white print) 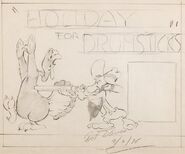