Daffy Duck visits Hollywood, wanting to see Hollywood moviestars (which he refers to as "stars") and tries to sneak onto the "Warmer Brothers" set, but does not receive a warm welcome from the Joe Besser-parody Studio Guard.

Daffy sneaks in the studio via various disguises (first as popular moviestars of the day such as Charlie Chaplin, Jimmy Durante, Bing Crosby, and then as the Academy Oscar) only to get kicked out each time by the studio guard, resulting to a long chase where Daffy outsmarts the dimwitted studio guard by disguising as both a studio tour guide and then a movie director, which often results to the studio guard receiving the short end of the stick each time.

Eventually, the studio guard finally catches Daffy, eager to throw him out of the Warmer Brothers studio, which Daffy reiterates that he won't leave until he gets to see "stars" (movie stars). The studio guard soon gives in to Daffy's wishes and lets him into the studio, which turns out to be a trick: he bluntly fulfilled Daffy's wishes by literally giving him stars to see (in the form of whacking his head with a baton numerous times) and then kicks Daffy out into the dumpster at the back of the Warmer Brothers studio. A dazed Daffy, whom is now in the dumpster, is happy to get to see "stars" of famous moviestars of the day, such as Hedy Lemarr, Alexis Smith, Dorothy Lamour, Baby Snooks, and Ann Sheridan (which the latter Daffy kisses), and hoots wildly, along with the Ann Sheridan star doing the same. 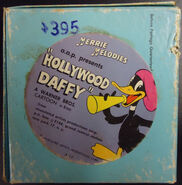 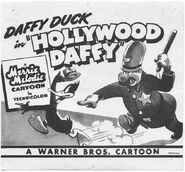 Retrieved from "https://looneytunes.fandom.com/wiki/Hollywood_Daffy?oldid=239112"
Community content is available under CC-BY-SA unless otherwise noted.