Honey Bunny is a female rabbit designed by Robert McKimson, and is the former girlfriend of Bugs Bunny who appeared in comics and was used for merchandising purposes beginning in the late 1960s (similar to its official successor Lola Bunny) 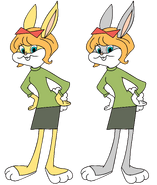