The title is a play on the phrase "happy days."

A short, older cat, who sounds like Jimmy Durante, can't catch mice anymore. He flatters Sylvester and offers to train him to be a champion mouser, for a share of the mice. He sends Sylvester into the ACME warehouse. Sylvester finds a mouse and chases it into a crate marked "Baby Kangaroo." Sylvester opens the crate and thinks he sees a giant mouse inside. Hippety Hopper kicks him right out of the warehouse.

His coach gives a pep talk and sends him back inside. Hippety pummels him and kicks him outside again. The coach butters him up and sends him in again, then declares, "If it keeps up like this, the kid'll make a vege-tanarian outa me!"

Sylvester coaxes Hippety back into his crate, then slips a lit dynamite stick in through a knothole. Hippety pushes it back out. Sylvester pushes it back in and covers the hole with his paw. It comes out another hole and Sylvester shoves it back in and covers that hole with another paw. When all four paws and his nose are covering holes, Hippety pops out another one and sends out half a dozen lit dynamite sticks, which blow the fur off Sylvester.

When the coach sends him in again and tells him to keep his left up, Sylvester keeps his left fist high in the air. He puts springs on his feet and bounces after Hippety. The kangaroo leads him up and over a stack of crates. Sylvester comes down on a keg of gun powder. His springs stick into the keg but he bounces up and his still-raised left fist sticks in the ceiling. The keg hurtles upwards, sending Sylvester through the roof and through the air, then the keg and the cat fall down a smokestack. When the coach climbs up to peer down the stack, the keg explodes shooting Sylvester upwards and his still-raised fist punches the coach. When the two fall back to the ground, Hippety hops past, doing his own Durante impression. 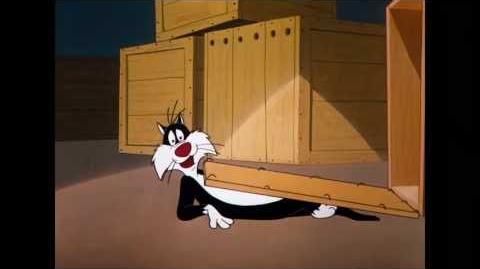 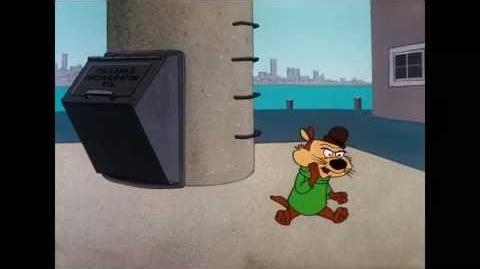 ABC omitted the scene where Sylvester manages to lure Hippety back into Hippety's crate and nails Hippety inside of it. He then inserts a stick of dynamite into the crate through a hole, but Hippety sends out of the crate through more holes a bunch of dynamite sticks that form a circle around Sylvester and explode, blasting Sylvester's fur off.