A large, dimwitted cat named Benny wants Sylvester, whom he calls "George," to help him catch a mouse to "hug and pet."

Part of the animator draft along with two other drafts for "Who's Kitten Who?" and "Pop 'Im Pop!" 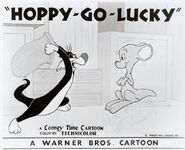